There’s a certain level of decency expected of people when they go out in public to, say, catch a meal or do some grocery shopping.

But what if you live near that place or on your way to the beach, for example; do you still need to change into a decent, regular outfit instead of going there in your pajamas or beach outfit? 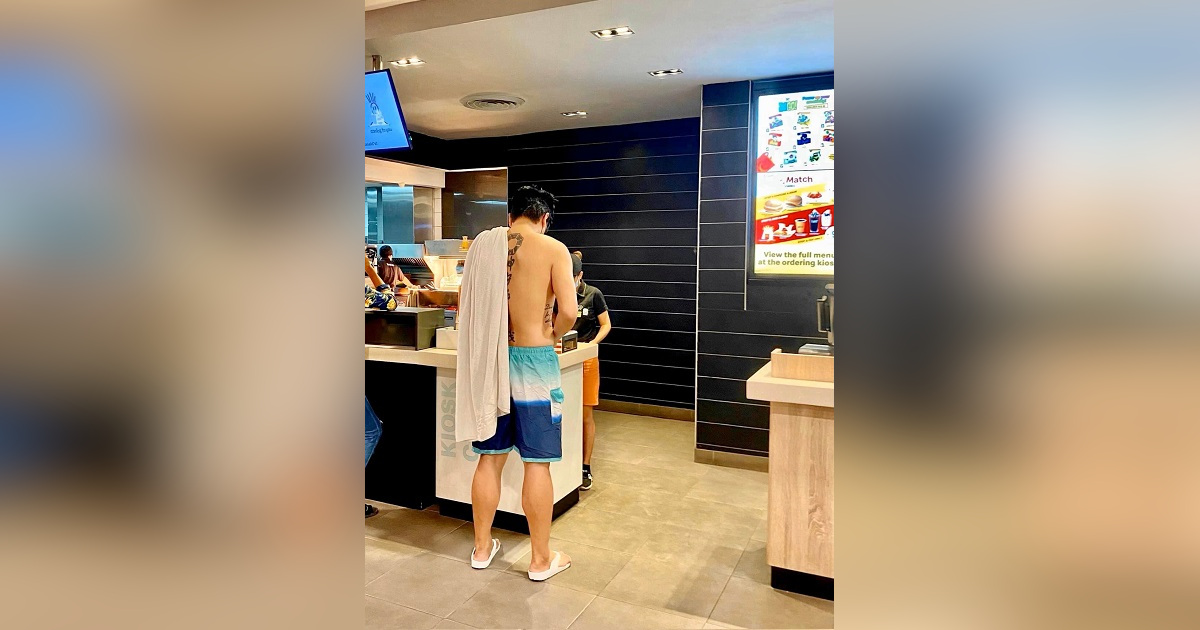 It was obviously taken at a popular fast food chain – and Willmer was wearing board shorts, slippers, but didn’t have a shirt. Instead, he had a towel swung over his shoulder, as if he was heading to the bathroom or the beach.

The post went viral, with some netizens making jokes about it.

But many others pointed out that this is actually a common scene in Boracay. Many of them have even tried going shopping in the mall while wearing their swimsuits. Wow.

Many of those who have gone to Boracay explained that many of these fast food chains are along the beach or coastline, so it’s really not uncommon to find people in their beach outfits.

Willmer explained that this photo was actually taken at a McDo outlet along the highway, not the beach, since the one close to the coast was already closed at the time.

Still, we found it quite hilarious that he did this.

Is There a Dress Code for Dining at Fast Food Chains?

Most, if not all, fast food chains don’t impose a dress code.

Aside from Willmer’s Boracay experience (and the many others that netizens pointed out), a woman went viral for buying at McDo in her PJs some years ago. LOL

Buffet Restaurant Appeals for Customers to Pay for Wasted Leftovers

A buffet restaurant took to social media to appeal to a group of customers to return and pay for their wasted leftovers. The post went viral, gaining mixed reactions from netizens.

These days, you can find so many buffet restaurants offering eat-all-you-can promos for a fixed price. Restaurants like this appeal to the public because of the many variety of food items that customers can enjoy with their money.

Sadly, this can lead to food wastage, particularly when the customers don’t understand that they should really just get the food that they can actually eat, not the amount they think they can.

Most of these buffet restaurants make guests pay for their leftovers, ensuring that the customers don’t waste the food. But it seems that a group was able to leave a buffet restaurant without paying for their wasted leftovers – and the photo of their table quickly went viral.

In a post shared by the Daily Guardian, the buffet restaurant was named Bariotik Eat-All-You-Can.

The restaurant charges diners Php499 for the eat-all-you-can offer, but they’re supposed to pay for wasted food or leftovers.

The post went viral but gained mixed reactions from netizens.

While many netizens sided with the restaurant, saying that these customers should have only gotten what they can consume, others wrote that the food was probably not delicious because they didn’t eat it all.

Still, most netizens agree that the food’s quality shouldn’t be reason enough for these people to waste it They should have tasted it first before getting so much.

How Do Buffet Restaurants Earn Money?

Buffet restaurants usually charge customers a fixed fee for their eat-all-you-can meals, but they still earn because the price is often high. Plus, only a few people can actually eat so much food – but they’re unlikely to make a buffet restaurant bankrupt (as long as they don’t eat there every day).

So, the customers still end up paying around the same amount they would have if they ordered their meals like in regular restaurants.