These days, it is quite easy to find a lot of things that you can do to earn money online. One of this is being a vlogger – and some people have earned millions of dollars just by making videos of things as ordinary as playing with toys!

In the Philippines, the Tukomi Brothers are popular for their hilarious pranks and dares. They also do comment trolling aside from the usual pranks.

But the group recently got into trouble with netizens. It was believed that they had gone too far in their pranks, leading one security guard at the mall to allegedly losing his job! But is that even true or is that also part of the prank?

It all started when one of the brothers decided to take a swim at the fountain in “The Peak” at Gaisano Mall in Davao City, southern Philippines.

The prankster stripped down to his board shorts, put on pink goggles, and began to swim the length of the fountain. A lot of mallgoers had such a good laugh over the prank and many even took videos or photos of the funny moment.

A crowd had gathered around the makeshift ‘pool’, with the prankster enjoying the ‘swimming lessons’ while his audience laughed.

But not everyone was amused by his antics. Even before he reached the end of the fountain’s length, a female security guard was waiting for him. He was told that swimming is not allowed at the fountain and that he should immediately vacate the area.

The prankster readily followed the security guard’s instructions but another guard had supposedly lost his job after the prank, angering netizens. 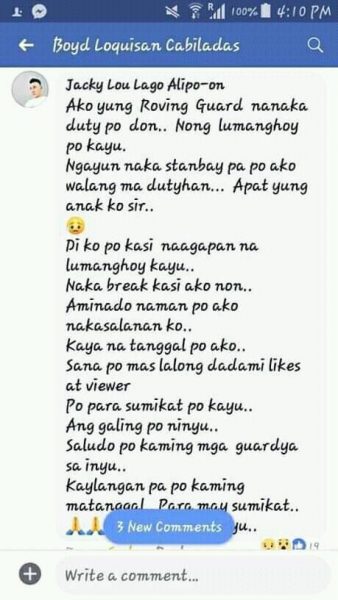 But while many people slammed the pranksters for costing this guard his job, it seems that this was just another prank comment. Others said that if this was for real, then the pranksters should find a way to get the man his job back!

A portion of the Manila Bay now looks like Boracay in a video made by a vlogger to update people about the controversial dolomite sand ‘dumped’ on that spot.

A lot of people have so many bad things to say about the dolomite placed at the Manila Bay, with clamors to divert the funds for other useful things such as vaccines and food for the poor.

Others are saying that the dolomite ‘dumped’ on that spot is useless and does nothing to make the place look any good.

But a video update by vlogger Junriel Llander shows that these naysayers are wrong. Yes, this dolomite project might be expensive but it has made the place look great!

Gone are the trash that used to cover this area. The usually murky waters and the dirty sand have been transformed into a piece of paradise that you could only see in areas with white sand beaches, such as the world-famous Boracay Island.

On May 24, 2021, Llander went to the spot with the dolomite sand to take a video of what’s happening at this area. There were a number of workers at Phase 1 Beach Front, all busy with keeping this place looking great.

Though the heavy equipment and the busy thoroughfare at the background betray the location, this place still managed to look like a slice of Boracay from some angles.

Llander credits the development to the ‘probinsyano’ president, Pres. Rodrigo Duterte who was able to make this place look beautiful.

No matter how bashers might say bad things about this spot, those who have actually gone to the area are saying that this spot at the Manila Bay certainly looks so much better than the dirty, grimy, garbage-filled dump it used to be!

Dolomite is a type of ornamental limestone rich in magnesium and calcium carbonate. Because of its white color, crushed dolomite could be mistaken for white sand. The sands at the beaches all over the world are mostly made up of quartz and feldspar.