In the Philippines, there are a lot of people who live below the poverty line. Sadly, many of them have nothing to eat for days, especially because the parents don’t have jobs or are just earning a meager income.

Recently, a teacher named Jen Dullente shared on Facebook the heartbreaking excuse letter of her student who had been absent for several days.

A Public School Teacher at the Department of Education – Division of Cagayan de Oro in southern Philippines, Dullente felt really sad after receiving the student’s excuse letter. She would later share a photo of the excuse letter on Facebook where it quickly went viral.

“As I read my students’ excuse letter, a magnitude of realization slaps me!

That’s why I choose to be a TEACHER.

To lend a hand to students like them and make them perceive that poverty is not a wall to break but an opportunity to climb and see what’s lies behind.” 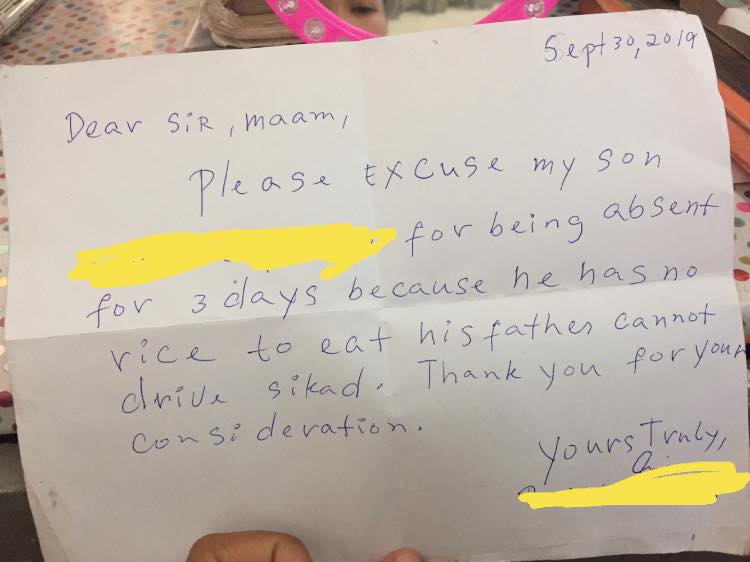 In the excuse letter, the mother asked for the teacher’s understanding that her child had been absent for 3 days because his father was not able to drive his sikad. Since the head of the family did not have income in those days, they did not have rice to eat.

Thousands of netizens could not help but cry along with the teacher over this sad excuse letter. Many said that it really is difficult for a student to go to school with an empty stomach. Others pointed out that this is a common problem among many families in the Philippines.

A sikad or traysikad is a tricycle that uses a bicycle pedaled by the driver. It is a cheap option for public transport in a smaller area, often inside a village or at a población (town center) where the passengers’ destination is just around or less than 1km away.