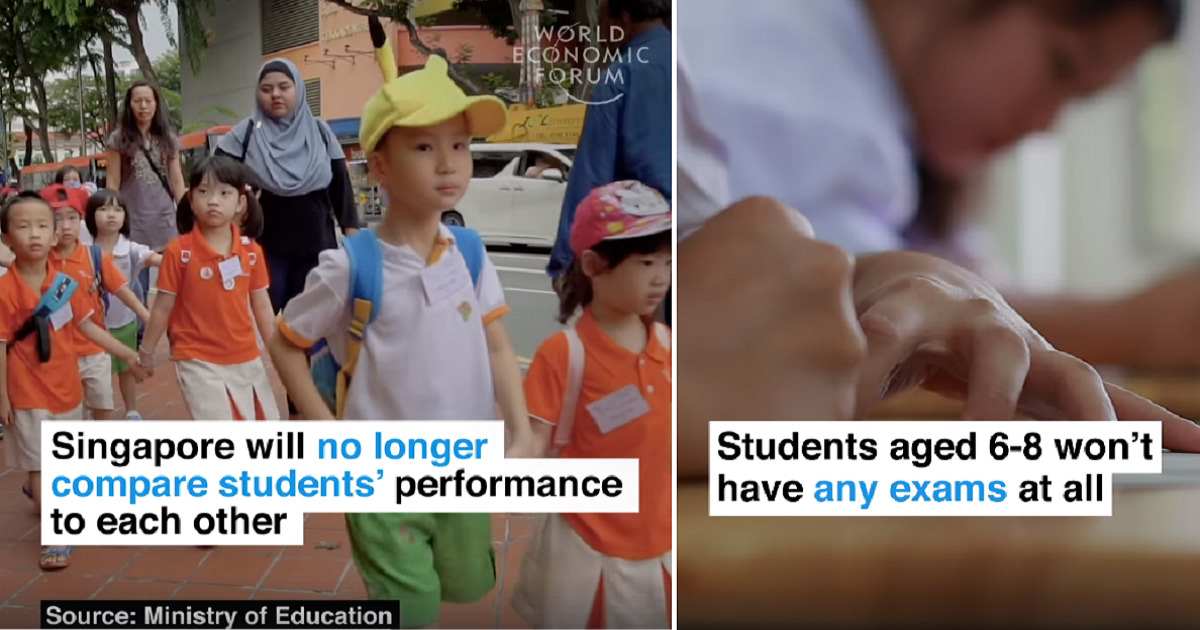 In a bid to show that learning is not a competition with other students, Singapore has changed its education system to remove ranking systems. Thus, there will no longer be top students in each class or year level. Moreover, exams have also been removed in some grade levels! Yay or nay?

According to the World Economic Forum, Singapore had long been known for its strict high-achiever educational system whereon students are required to go to school for longer hours (compared with other countries’ educational systems). This is geared toward better exam success.

But change has come to the country and by 2019, primary years 1 and 2 students will no longer take exams. While exams are removed, this does not mean that students no longer have to study but they will be doing so in a less competitive environment.

For older primary as well as secondary students, there will be exams but grades are rounded up to the nearest whole number to put emphasis on academic success.

In line with this, there will be a lot of changes that students and teachers have to adapt with. This includes discouraging comparison between students. Instead, each one is encouraged to concentrate on his/her own learning development.

As such, there will no longer be list of pupils finishing at the top or bottom of the class. Moreover, report cards will no longer indicate the student’s ranking. Meanwhile, school reports will not highlight failing grades or focus on pass/fail results at the end of the year.

These changes in the educational system hopes to develop well-rounded individuals who are not just academically inclined but are also good in social interaction. The education minister also hopes that this would help develop decision-making skills and self-awareness in the students.

By 2023, Singapore will implement ‘applied learning’ programs to help students acquire real-world skills, not just for academic advancement but also for personal development.

Singapore is no longer comparing students to each other

Education is about progress, not exam results. Read more: https://wef.ch/2NAXqNz

The #ManilaBayChallenge trends on various social media sites, with netizens showing a lot of creativity as they shared hilarious pictures.

Last week, netizens flooded social media with angry posts about the crushed dolomite rocks that were dumped along the shores of Manila Bay as part of the beautification project. Many think that the crushed dolomite, passed off as white sand, is not a good thing to put on that spot.

But others disagreed, saying that the new look of the Manila Bay, whether due to crushed dolomite rocks or real white sand, is so much better than when it was covered with lots of trash.

On Sunday, authorities temporarily opened the portion with the white sand so people can admire its beauty. Soon, however, things got out of hand as thousands flocked to the spot to take photos, without thought of social distancing.

Considering that the COVID-19 pandemic continues to rage, many were alarmed to see so many people taking photos of the white beach, with many not even wearing face masks. The SWAT had to be called in to make people follow the rules but it was clear that so many hard-headed folks had flocked to the spot.

But netizens soon found a hilarious way to use these photos as the #ManilaBayChallenge went viral. Using photos of the crowd, netizens jokingly added their own beach photos and claimed that these people were taking their photos. LOL.

The posts are quite creative, with many sharing some of their most beautiful beach pictures while others picked the funnies ones.

The #ManilaBayChallenge dares people to share their beach selfies in a photo collage with a photo of the crowd taking pictures of the ‘white beach’ at the Manila Bay.
Continue Reading