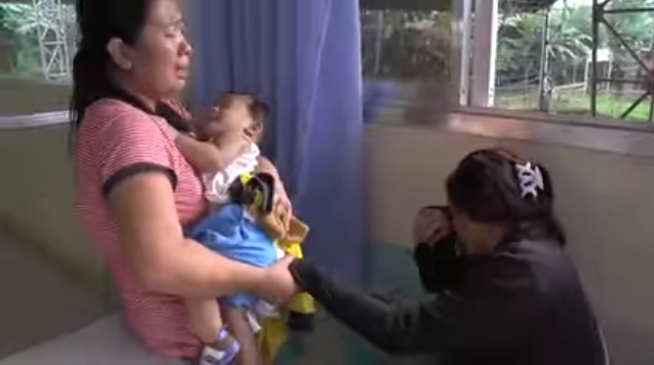 Not ready to take care of her second child, Mhea Lyn Corpin left her baby with her friend Ana Mendoza at Brgy. San Roque, San Jose Del Monte, Bulacan but weeks later, she wanted to get the baby back.

When Ana and her husband Christopher supposedly asked for Php9k in exchange for the baby, Mhea Lyn sought the help of Raffy Tulfo. But things took an unexpected twist when she returned the child to the couple just days after winning the case!

What made her change her mind?

On “Raffy Tulfo in Action”, Mhea Lyn claimed that her first child had a tumor and she was not ready to care for a second baby; thus, she gave the baby to her friend, promising to support the child and visit him regularly.

At the time, the baby was still 3 months old.

Now that things are better with her first child, Mhea Lyn wants to get the baby back but Ana and Christopher weren’t cooperating, she claimed. Because she didn’t have the money to pay for the Php9k they were asking, she went to Tulfo’s program for assistance.

But when Tulfo talked to Ana, the latter claimed that the baby was not the child of Mhea Lyn’s husband. She also revealed that Ana rarely visited the baby and didn’t even provide financial support just like she promised.

Tulfo praised and thanked the Ana for what she did to the child but reminded her that though she was in the right, the law takes the side of the baby’s biological mother, Mhea Lyn.

At the barangay hall, Ana unwillingly gave up the child to Mhea Lyn. It was clear that the couple had learned to love the baby just like their own kid in the months they had cared for him; they were both clearly devastated.

But just 12 days later, Mhea Lyn returned the kid to Ana and Christopher! She claimed she and her family were sick and she was afraid that the baby might also get affected.

Months after that moment, the Tulfo in Action team visited the couple. After seeing that they are still caring for the baby and doing so rather well despite their financial status, the team sought the help of the local social welfare officials to declare the two as the child’s legal foster parents.

Mhea Lyn was also warned against taking the baby again then returning it to the couple.

A pair of twins named Jollibee and McDonald recently went viral for graduating from Senior High. A lot of netizens were simply amused that they would hold such names, particularly because the names are of two rival fast food outlets! LOL.

Kid Who Can’t Even Afford Shoes, Grows Up to Become NCAA Season 95 MVP