Wondering whether coffee shop goers needed to be dressed up a certain way, a netizen turns to Facebook airing his reaction towards a tweet featuring two men seated in a coffee shop.

In a Facebook post which has recently gone viral, Jhong Garcia uploaded a screenshot of the post where the uploader shared his sentiments about dressing decently in public places. The uploader of the Twitter post called for the banning of sando, shorts, and ‘tsinelas’ in public areas. 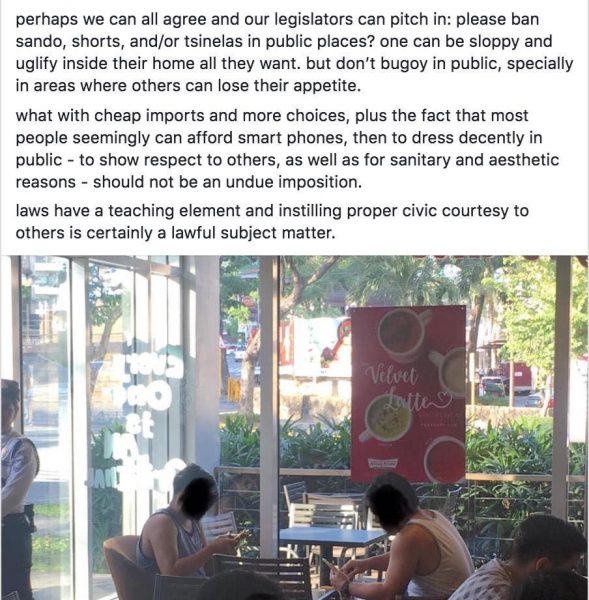 According to the text included in the screenshot, one can be sloppy and ‘uglify’ inside their homes all they want, but not to ‘bugoy’ in public, especially in areas where others can lose their appetite.

Furthermore, the post expounds that with the cheap imports and more choices, and the fact that most people can afford smartphones, dressing decently in public should not be an undue imposition, as a sign of respect for others and sanitary and aesthetic reasons.

Lastly, the author of the post said that laws have a teaching element and instilling proper civic courtesy to others is a lawful subject matter.

In his post, Jhong asked fellow netizens why the kind of clothes one wears to a coffee shop is such a big deal and found the featured tweet weird.

The said Facebook post has been shared more than 22,000 times and has garnered more than 14,000 reactions from other netizens.

Some of the commenters in the viral post questioned the motivation behind the said Twitter post. Some said that, perhaps, the uploader was a social climber o someone who feels entitled. One even said that the person behind the tweet might have never gone out of the country, as people in other parts of the world like in Australia goes to popular coffee shops wearing only shorts or bikini.

Some netizens, on the other hand, said that there are actually bistro cafes and even a local computer shop which prohibits sando-wearing customers from using their facilities.