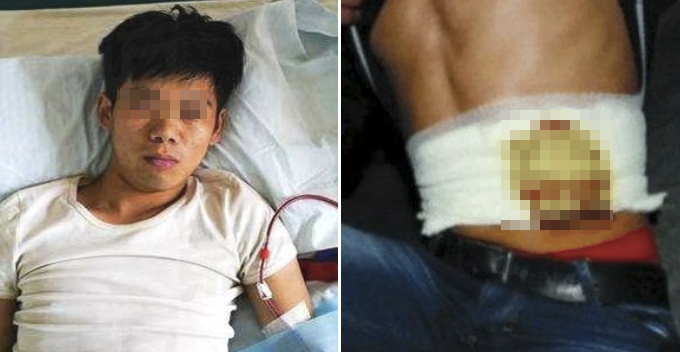 In modern culture, a lot of people are fans of Apple and would do anything to get their hands on the latest model.

But it seems that some people don’t know how to differentiate a joke from reality – or he was just a big Apple fanatic.

Xiao Wang from Anhui, China, was just 17 years old when the iPhone was first release back in 2010. Just like many teens, he wanted the phone so much that he was willing to do everything to get it.

In school, everyone wished to have an iPhone but not too many could actually afford to get their hands on one.

Just like most of his friends, Xiao didn’t have a lot of money but he still wanted to buy one. So, he thought it would be a good idea to sell a kidney.

“One kidney is enough for me, why do I need the other one? Why don’t I just sell it?” Xiao mused.

At the time, it seemed like the best idea in the world. After all, humans have two kidneys and only need one to live, right? Well, that’s right but with just one kidney, he now has to be extra careful and hope he wouldn’t get sick!

After asking around, Xiao learned that an ‘underground’ hospital in Chenzhou would pay him 22,000 yuan ($3,200) for a kidney. Seeing that he would get even more than the price of the iPhone, Xiao quickly traveled from Anhui to Chenzhou for the procedure.

But the hospital wasn’t a legitimate one. Though he was properly paid for the kidney, he developed an infection. Scared that his parents would get angry, he didn’t tell them until it was too late.

They rushed him to a real hospital but it was too late by then; he had lost function on his remaining kidney! Ouch.

His parents took the hospital and the middle man who ‘helped’ him get the deal but though they won the case and received compensation, Xiao’s health continues to deteriorate and he’s been paralyzed for years.

He sold a kidney for the iPhone 4, but he is now the one in need of a kidney donor as the remaining one is failing him…

A pair of twins named Jollibee and McDonald recently went viral for graduating from Senior High. A lot of netizens were simply amused that they would hold such names, particularly because the names are of two rival fast food outlets! LOL.

Kid Who Can’t Even Afford Shoes, Grows Up to Become NCAA Season 95 MVP