These days, wedding proposals have become more of a public thing, a public declaration of love where the guy often finds help from the girl’s friends and family to make the event possible.

Sometimes, though, the proposal goes wrong because the woman refuses to accept the offer, bringing embarrassment to the guy in such a public setting.

There’s this proposal to a flight attendant that went viral because it was so sweet – and had said, “Yes!” But what happened next shocked the world because the airline fired the girl for accepting the proposal! Isn’t that crazy?

The flight attendant, whose name was withheld for privacy reasons, works for China Eastern Airlines. During one of the flights she was in, her boyfriend popped the big question in the middle of the flight, while they were thousands of feet above the ground.

It was a truly romantic moment – and the passengers cheered for the couple after the flight attendant accepted the marriage proposal.

“I really didn’t know my boyfriend would be proposing to me on this flight. Thanks for being my witnesses,” the flight attendant later announced.

Little did they know that the beautiful moment would turn sour after the airline learned about it when the video went viral.

Instead of getting amused that the airline became instrumental for this viral moment to happen, airline officials believed that the flight attendant was wrong for accepting her boyfriend’s proposal while she was at work.

Apparently, the airline officials believed that the proposal had caused a disturbance and while enjoying the moment with her boyfriend, she neglected passenger safety during the flight. Such neglect is an unforgivable offense; thus, she was immediately terminated. 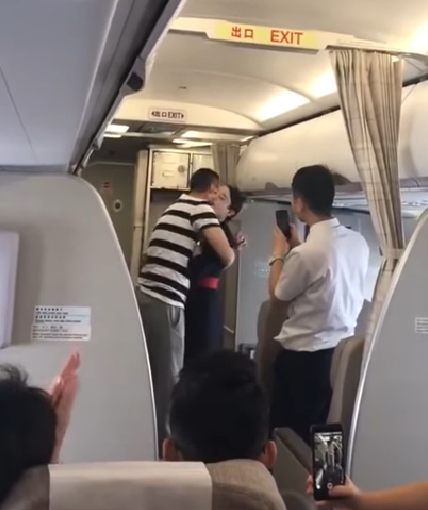 The unjust termination sparked outrage in the online community, with people calling for a boycott on the airlines.

Others are saying that this was really ridiculous, especially considering that if there’s someone to blame for the situation, it was her boyfriend – yet the moment was certainly something that didn’t really put the passengers in danger, why should she be punished for it?