In the Philippines, neighbors are like family members to us.

There are lots of times when neighbors help each other in things that foreigners would be surprised about! For example, if one neighbor owns a fridge, some might ask for favor in storing some perishables, particularly ice cream, for a little while. That’s something that you probably won’t be able to do with a foreigner neighbor but Pinoys do that a lot!

But what happens when the people in that house think that the item in the fridge is theirs? That’s when the trouble starts. LOL.

Recently, a netizen shared a convo she had with her sister who ate the ice cream in their fridge, thinking she bought it – but it turned out to be owned by their neighbor who only asked to put the food item in their fridge! Uh-oh. Epic fail?

Angel Lim posted photos of their convo, with her sister happily messaging her about the ice cream. The younger girl teases her sister to go buy another tub of ice cream because they already ate the one in the fridge, thinking she had purchased it. But Angel had a good laugh as she told her sister that she did not buy the ice cream – it is owned by their neighbor!

She could not help but laugh at her younger sister, Crystal Libre Lim, teasing her that she would be in big trouble if their neighbor comes back to get their ice cream. LOL. For sure, the neighbor would get the ice cream.

Indeed, the neighbor went to their house, but there is no more ice cream left. After Angel’s post went viral, Crystal reposted it and explained that she had already paid for the ice cream. Awwww. 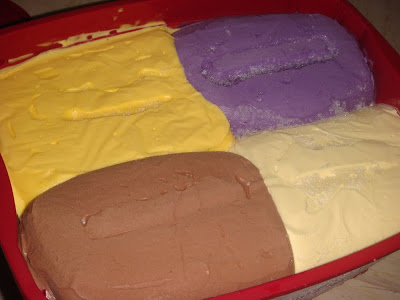 Bayanihan or the bayanihan spirit is a Filipino custom derived from the term ‘bayan’ which means town or community. In this custom, people in the community help each other, often without asking for anything in return.

A woman recently went viral after sharing her “plan” to return a borrowed screwdriver to partying neighbors – some three months after she borrowed the toolkit! Netizens quickly gave her an outpouring of support, egging her on to return the thing. LOL.

Filipinos have the habit of courteously inviting others to eat with us when they pass by or visit us while we’re eating or about to eat. Of course, while it’s just for courtesy, we don’t mind (most of the time, anyway) if they actually help themselves with the food we offer.

But Filipinos also have this rather annoying habit of borrowing stuff and never really thinking about returning it to the rightful owners until they ask for it.

So, many netizens were easily able to relate with the social media post of Chel Diaz who jokingly uploaded a picture of a screwdriver set amid the background of her neighbor’s party setup.

Netizens quickly offered their support, encouraging her to return the tool set right away.

Of course, there were some who took Chel’s joke seriously, chiding her for not returning the tools and only picking the timing when there’s a party next door.

But she did “succeed” in her plan as she jokingly shared photos from the party, adding that she supposedly feels guilty while taking some lechon and lumpia. LOL

For several days, the Amanpulo turon became the talk of the town as netizens expressed shock over the prices of the food at the exclusive resort. Some speculated that it might not be true, but one netizen proved that it was by sharing a photo of the menu and the food she received. Do you think it’s worth the price?

What’s up with the Amanpulo turon? Well, it recently went viral as one of the food offerings on the expensive menu of Amanpulo, an uber-expensive private island in Palawan favored by many local celebrities.

It’s the favorite beach getaway and hangout of the stars, where some posh weddings and other private star-studded events are held.

This exclusive place is reportedly accessed through a private plane – so that alone shows you how expensive this resort can be.

However, the prices of the items on the menu still got so many people wondering how the food looks like and how it would taste, considering how each one is several times more expensive than ordinary menus from regular restaurants.

There are many expensive items on the menu, but the turon stood out because this favorite Pinoy food is commonly found in the streets, sold for around Php10 to Php20 per piece. So, imagine how everyone reacted upon seeing that it’s worth Php750 a serving at Amanpulo!

Netizens had a field day about feeling like a “slapsoil” (hampas-lupa) knowing the prices of this popular food at the exclusive resort.

Some thought this menu might not be for real, but someone proved that it is actually true.

Amanpulo is a luxury resort on a private island in the Cuyo Archipelago of Northern Palawan, Philippines. It’s a private and secluded getaway, making it a favorite among celebrities who just want to relax and have some fun at a resort without getting mobbed by fans.

Despite the rains, having no bridal car wasn’t a problem for a pair of newlyweds because the groom just carried his bride across the muddy roads! That’s so cool, right?

There are many challenges that couples face along the way, with these challenges often helping shape their relationship.

But a couple in Barangay Trinidad, Guihulngan City in Negros Oriental, Central Philippines, had a different kind of challenge as the rains the previous days made the roads so muddy in their area.

Living in what appears to be a mountainous area, they aren’t likely able to bring a bridal car, even if they wanted to. But the groom proved his love for his bride by carrying her on his shoulders as they walked the muddy roads together. Isn’t that sweet?

Their photos went viral, with some netizens joking that this couple raised the bar high in marriages – and that girls shouldn’t get married if their man wouldn’t promise to carry them through the muddy roads. LOL.

We’re stating the obvious, but that’s a joke, of course.

The post was originally uploaded by Enao Aileen Billones, congratulating the couple on their wedding day.

It was quickly picked up and shared by the local media and groups, with HEADZ UP NegOr writing the perfect caption:

“In sickness or in health…

No bridal car or horse or even carabao needed to transport the bride just to be in the Church on time for their wedding in Barangay Trinidad, Guihulngan City.

Many netizens were amazed, with some saying that they know this couple would last forever because the groom truly loves his bride.

Others were a bit unsold to the idea, commenting that the bride shouldn’t have worn a bridal dress if they had to walk through mud. If the groom missed a step, both of them could end up in the mud!

It was a good thing that didn’t happen. Whew!

What bridal car is the best pick? Most people prefer white cars because they match the wedding theme of purity. But it’s not really a requirement. You can choose any car color – and some even pick native themes like carabao-drawn carriages or even those drawn by horses.

Graduate Who Felt Like a Failure for Being Left Behind by Batch, Top 2 in CPA Board Exams

Student Afraid of Math, Top 6 in Civil Engineer Board Exams