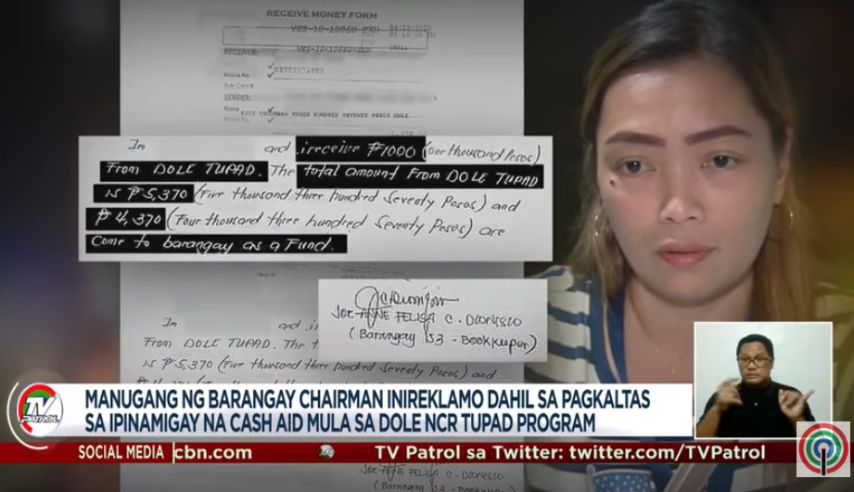 A brgy. chairman’s daughter-in-law gets huge cut from TUPAD recipients’ payouts, angering netizens for the anomalous transactions. But she insists that it’s legal because she even explained why recipients only received Php1,000 from the Php5,370 TUPAD payout!

The COVID-19 crisis affected so many people, leading to the loss of income for workers and businesses/companies alike. In the Philippines, a lot of financial assistance programs were rolled out to help those who temporarily or even permanently lost their jobs amid the pandemic.

But a lot of anomalies have also been reported, particularly of barangay officials taking a portion of the payouts. There were many who got Php500 from the recipients as ‘processing fee’ or for some other reason.

Maricris Esteban, the wife of Kagawad Emmanuel Esteban of Old Balara, Quezon City, gets Php500 from the recipients as ‘membership fee’ for the Old Balara Ladies Group.

There was also a brgy. kagawad who was caught on video taking half of the recipients’ SAP money.

But someone just topped that brgy. kagawad’s anomaly after just giving Php1k to recipients of TUPAD in their barangay who received Php5,370! That means that she got Php4,370 from them. Whoa.

Under the TUPAD Program of Cong. Rolan Valeriano, several people in Brgy. 153 in Manila were supposed to receive Php5,370. But the daughter-in-law of Chairman Herman Dionisio, identified as Joeanne Dionisio, only gave Php1,000 to the approved recipients.

“Rose” was one of the recipients. While Joeanne explained to them that they will only receive Php1,000 because the rest will go the barangay’s funds, she knew that this should not be the case. So, she reported the matter.

Joeanne admitted that she had, indeed, done that but claims that it was legal because she explained it to the recipients. She even said that all the other recipients were alright with that; only Rose complained.

The money was supposedly used to give out relief goods to the needy ones in the barangay! Check out this report:

Tulong Panghanapbuhay sa Ating Disadvantaged/Displaced Workers (TUPAD) is a financial assistance program that provides emergency employment for displaced workers, underemployed and seasonal workers. This community-based package of assistance is for a minimum of 10 days but not more than 30 days.

The workers do certain jobs (such as sweeping the streets) and are given money for their services.