Life might have been difficult for a group of friends from Zamboanga Sibugay, but they worked hard to complete their dreams – and they were able to not just graduate together in college but also from graduate school!

The four friends come from the Municipality of Malangas in Zamboanga Sibugay, southern Philippines. Although they came from poor families, poverty did not stop them from going to school and reaching for their dreams.

According to Francisco, their municipality offered high school students a chance to go to college for free if they take up any of three courses: Bachelor of Elementary Education, Bachelor of Computer Science, or Bachelor of Criminology.

Because it was her mother’s dream to become a teacher but it was cut short due to financial problems, Francisco chose to study BEEd at Western Mindanao State University-Malangas Campus. There, she met three other ladies who shared a similar dream.

Together, the four helped each other complete their college degree and pass the board exams.

They thought life would be easy after college but found out that landing a job at the Department of Education (DepEd) was a big challenge. The three found jobs in private schools where they earned just around Php8,000 per month, while their fourth friend Ejaniven V. Catalan worked as volunteer at her town.

The small salary did not stop these ladies from reaching for their next collective dream: completing graduate school. They went to Saint Columban College, traveling 3-4 hours every weekend to attend their graduate classes. With their measly income, everything was a challenge for the four friends, yet they never gave up on their dreams.

Recently, their dreams came true. They completed graduate school together! 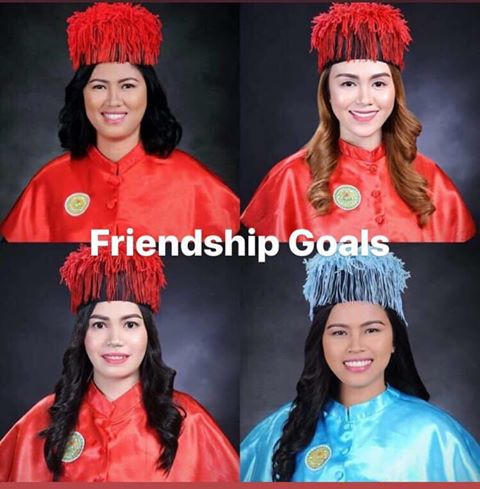 According to Francisco, they had to take loans just to fund their studies and things were extra challenging during their compre exams plus they also had to spend money on their thesis, but they finally managed to complete their graduate studies.

She also shared that they also achieved another friendship goal as the three found a job with the DepEd last year while she became an instructor at Western Mindanao State University, External Studies Unit.

This June, the four will once again take a journey to their next friendship goal: graduate from PhD together!