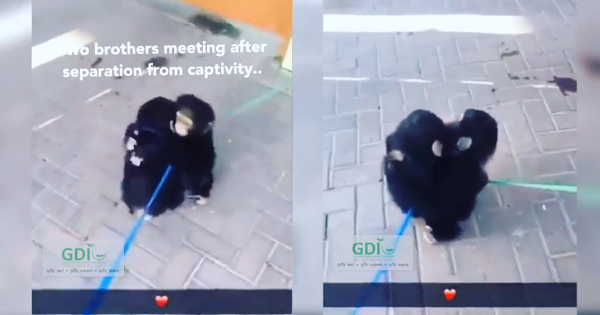 It is amazing how animals can sometimes behave just like human beings – and such has been observed many times in our distant ‘cousins’, namely the monkeys and apes. Not only do we share similar physical characteristics with these animals, we also share similar attitudes and reactions to situations.

For instance, there is this video of two monkey brothers that went viral recently on social media.

Well, this one might not seem special at all but the back story is sure to make you watch the video with amazement.

The video was shared by Gdi Galhinna Development Initiatives with the following caption:

Rescued from captivity, these two brothers were separated for treatment in two different Ngos. After recovering, they were taken to be reunited. Look at what happened… <3

Just like people who were separated from each other, these two monkeys embraced and showed their love for each other when they were reunited. It really amazed a lot of people.

There was no further information as to why the animals had to be put in different places during captivity or if they had other family members who were also there. However, people were just glad to see that the two are alright and that they seemed to be feeling much better.

It is unclear whether the two would remain captive for long or if they would be returned to the wild, considering that many young monkeys are getting poached in Sri Lanka where the NGO, Gdi Galhinna Development Initiatives, is based, shared Elite Readers.