A tricycle driver who dreamed of graduating from college someday finally fulfilled his dreams recently after he graduated from an Education course; but his achievement has been marred by negative comments from people who think his degree was useless since he’s already 64 years old.

During the day, Tatay Generito would drive his tri-sikad (tricycle) and would attend his classes at night. 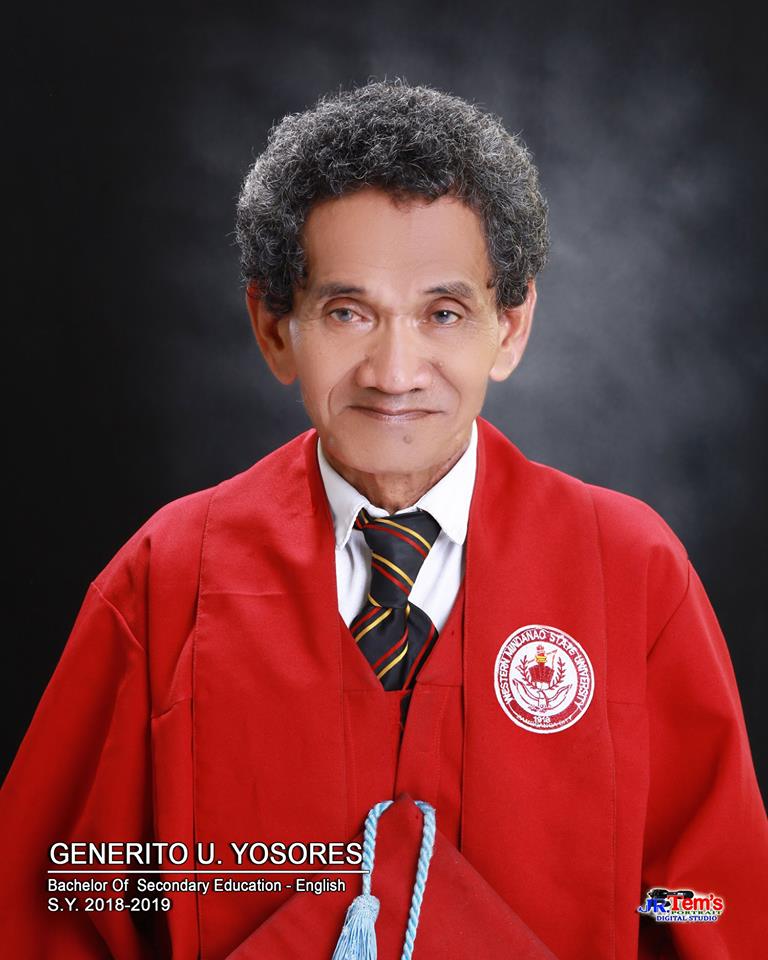 Tatay Generito impressed a lot of netizens because he earned a degree in college even though he is a lowly tricycle driver who had to support himself in school. Moreover, the degree he took is not something that one might expect a tricycle driver his age would take.

But while a lot of people were happy for this old man who has finally achieved something he has only dreamed of his entire life, many called him ‘pasikat’ and said his degree was useless considering that the Department of Education (DepEd) mandates that its teachers should retire at age 65.

With Tatay Generito being 64, he only has a few months to take (and pass!) the board exams for teachers. But even if he passes the test and becomes a licensed teacher, finding a job would be a big challenge considering how difficult it can be to get admitted in the ranking system of DepEd.

But Tatay Generito isn’t after finding a job as teacher – he was only just trying to fulfill his lifelong dream!

In a comment on the post by ABS-CBN News on its Facebook page where Tatay Generito got a lot of negative comments, teacher Alfred Cañete explained that the old had been one of his students for 2 semesters – and he was quite impressed by the tricycle’s driver dream of graduating from college despite his age. 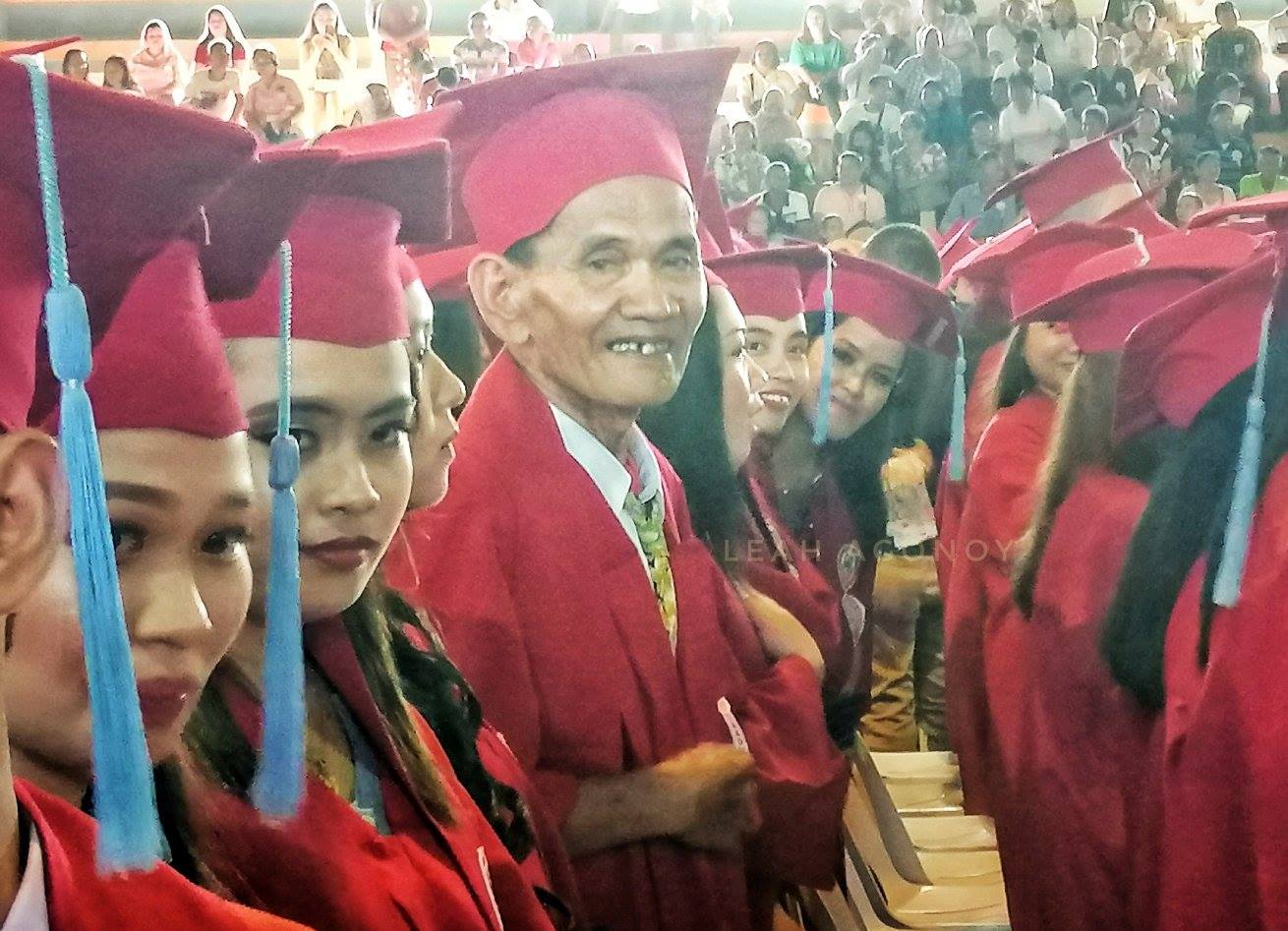 The old man even tried his best to fulfill the requirements of the course on his own. Tatay Generito told Teacher Alfred that he was not able to complete his studies at a younger age due to poverty but he had always dreamed of eventually earning his degree.

“It is never too late to reach for your dreams. Education has no age limit. Dreams are free,” Teacher Alfred added.

Congratulations, Tatay Generito! Don’t let those people get you down…

A half-Badjao girl who used to dive for coins at the pier is celebrating her success now that she has become a teacher and a master’s degree holder. Who would have thought that she used to do that in her younger days, huh?

Life was difficult for half-Badjao Arlene Eje Alex while she was growing up. Despite being poor, her father refused to let her dive for coins at the pier or beg for money in the streets like other Badjao children.

But her father got sick while she was still young; so, she did those things so they can have some food. They lost their dad when she was just 12 years old.

Life was difficult but she also knew that if she doesn’t go to school, she’d be stuck in the streets or the pier for the rest of her life. So, she found ways to send herself to school.

Through hard work and determination, she was finally able to complete her degree in Education. But she didn’t stop there. She continued to work harder and study more – and has now become a Master’s degree holder.

Why Badjaos Dive for Money in Pier

Badjaos live in the waters, originally in the Sulu Sea. But various problems forced many of them to travel to other places in the Philippines, diving the pier waters for coins that people toss.

It’s unknown how exactly this practice started but it’s common in many piers across the Philippines.

Badjaos are known to have the ability to hold their breath for minutes, making these dives particularly interesting.

One dad who’s struggling financially and has a special-needs child didn’t feel tempted to keep or sell a phone he found in a jeep. He said that he immediately thought of his kids when he found the phone and wanted to do the right thing as a role model for his children!

Guy Goes Viral for Returning Phone He Found in Jeep

Some netizens argue that good deeds like returning money or a cellphone you found somewhere should not be something that should be in the news. After all, returning something you don’t own is one thing that people should do!

But with so many people taking advantage of others, and a lot of people losing valuable stuff and never getting them back, it’s really still impressive to hear stories of the honest ones who return items that aren’t theirs – especially valuables.

Christian Baluyot, 22, is a dad to two kids, one of whom is a special-needs 3-year-old child. Working as a merchandiser, Christian doesn’t earn much, but when he found a cellphone in a jeep, he wasn’t tempted to keep it.

Immediately after finding the phone (an iPhone), he made attempts to find the owner by posting about it on his Facebook account.

The owner, Patricia Tawat, didn’t see his post but was surprised when Christian answered the phone when she called it.

Impressed, Patricia posted about the experience, praising Christian for being honest.

After the post went viral, Christian explained that he didn’t think it was a big deal and that he was only doing something that he thought was right. When he found the phone, his only thoughts were his children – and how he wants to be their role model.

Characteristics of a Role Model

The following are some characteristics of a role model:

He risked his life to save a dog from the river – and it wasn’t even theirs! For that, a teen received praise from netizens and got rewarded with a senior high school scholarship, smartphone, and groceries. Wow.

Margole Miko Ilagan recently shared a video of the heart-stopping rescue mission that a teen did at the river to save a drowning dog. Netizens were impressed that the teen, identified as Angelo Diolata Flores, risked his life to save the poor creature.

In the clip, Angelo could be seen rushing to the dog’s aid by swiftly moving towards the creature from the side of the sloping dike. It was a difficult feat because there was nothing much for him to hold on to, yet this young man did not mind.

It was also clear from the shouts of encouragement and warning from the people taking the video that the dog wasn’t even theirs. They warned him to be extra careful because the frightened dog might bite him.

But the dog must have sensed that this human wasn’t there to harm it but to save its life. It appears to be whimpering as Angelo tried to gain its trust.

Then, the young man had to face another challenge as he tried to bring the dog out of the river and up the dike. Thankfully, there was a wire he could hold on to in that part of the river. He used that to keep his balance as he pushed the dog up. The mission was a success!

Also known simply as the AFK, the Animal Kingdom Foundation is a non-profit animal welfare organization in the Philippines. The non-profit organization (NGO) is based in Tarlac and aims to improve the living and welfare conditions of animals.