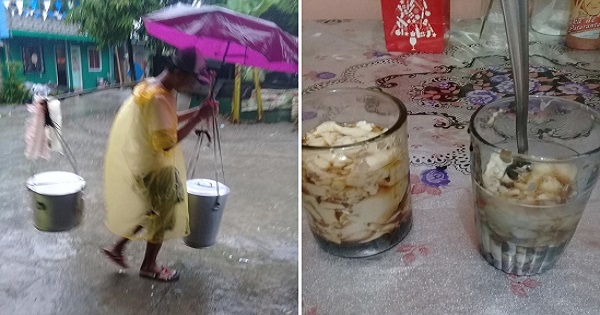 It was rainy day and everyone was just trying to stay at home and stay dry when netizen Anita Lescano Beato noticed a taho vendor passing by their home, clad in a raincoat and also holding an umbrella.

At first, Anita thought that the taho vendor was doing his usual rounds around town to sell his taho. It turned out that he was still going around the town despite it being a rainy day – yet he was not selling taho.

Instead, he was giving out free taho as Christmas gift to his loyal customers and to everyone at random!

She posted on December 23, just 2 days shy of Christmas Day. And just a few hours later, the post had gone viral and gained over 47k shares and more than 63k reactions.

A lot of netizens were definitely impressed by this taho vendor’s kindness and generosity, especially considering that he is one of those people who have to work extra hard, physically hard, to earn a living.

He earns his money by carrying that huge vat of taho on his back, walking around town to sell his goods – yet he readily does the same on this rather rainy day, just to give taho to people for Christmas! Isn’t that truly inspiring?

A lot of people praised the taho vendor, saying they wished Anita was able to get his name and contact number so they could also share him some of their blessings. Others tagged civic-oriented show “Kapuso Mo, Jessica Soho” to feature this guy and help him out. We hope to see him on TV soon!