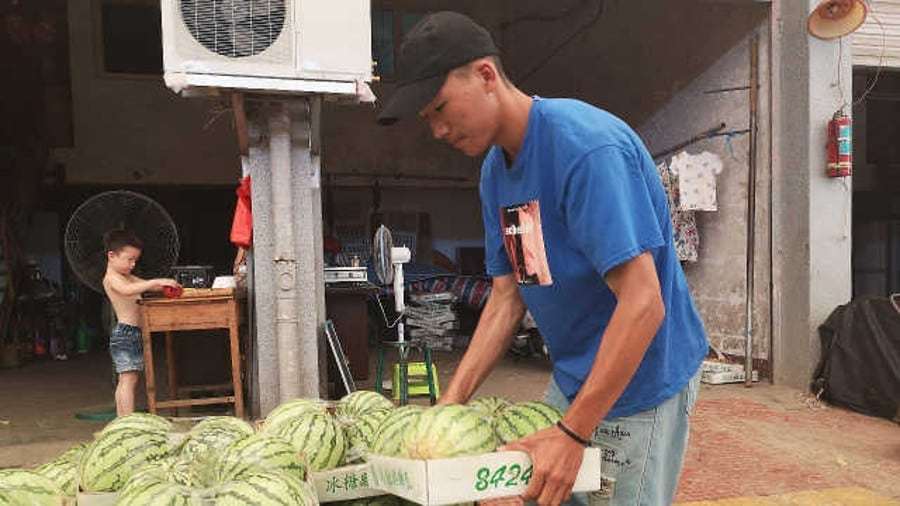 An 18-year-old student recently earned praise for refusing donations from well-meaning netizens because he wanted to complete his studies from money he earned on his own.

Dubbed as the ‘Watermelon Boy’, the student identified only by his surname ‘Li’ had grown up in poverty. He hails from Yongkang, Zhejiang province.

According to the Shanghaiist, Li was abandoned by his birth mother soon after he was born. While he was loved and cared for by his adoptive family, they were poor. They could not afford to send him to school.

But poverty has not stopped Li from trying hard to reach his dreams of becoming a police officer someday.

He worked hard to support himself.

He was recently accepted to the Zhejiang Police College, with exception marks at that! However, the young student needs to raise 14,000 yuan ($2,000) in 2 months so he could pay for his tuition fees.

Therefore, the hardworking student set out to sell watermelons to raise the money. His profit was small and he didn’t sell a lot of watermelons but the determined student was happy with the 100 yuan ($15) a day he got in the first few days.

Fate, however, played a cruel joke on Li. Aside from not earning a lot, the student wrecked his motorbike when he fainted one morning; this cost him 1,000 yuan ($150).

Taking pity on Li, a lot of netizens decided to give him money but the young student refused. He would rather sell them his watermelons that accept their donations.

“If I take their money, I would never be able to hold my head up high. I have to work hard to achieve what I want in life. You can’t just buy that with money,” Li said.

He plans to sell 35,000 kg of watermelon to have enough money for his tuition fees.

Thankfully, a lot of people came to buy his watermelons after his story went viral. He still had 1 more month before school starts but he has been able to save 8,000 yuan ($1,175). At the rate he’s going, he’ll soon be able to pay his tuition fees and still have some left for his other needs.

Good luck to you, young man!