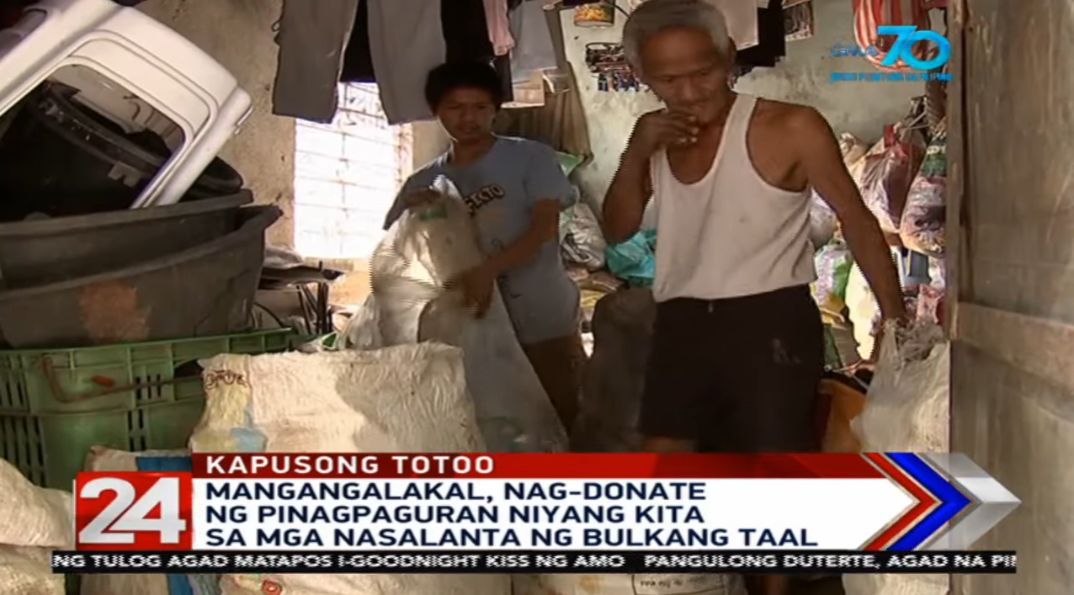 He doesn’t have a lot of money and actually struggles each day as he roams around the city looking for bottles to sell so he can have food, yet when he heard about what happened in Batangas, a scavenger rushed to GMA Foundation to donate his entire savings to the Taal evacuees!

Tatay Ben Garcia is 71 years old but he still roams the city to search for bottles he could sell to the junk shop. He is accompanied by his youngest son who has special needs. The used bottles and other things they get to collect around the city are placed at the sidecar of the bicycle his son drives.

At the end of the day, they sell all the stuff to the junk shop where they could sometimes earn as much as Php500. This is already a big income for Tatay Ben; thus, when that happens, he would keep Php200 as savings for the rainy days.

Despite the meager income he and his son earn from the junk they collect and sell, Tatay Ben was able to save a total of Php2,000. And while it took him many months to save that money, Tatay Ben willingly donated everything to the Taal evacuees!

For Tatay Ben, the money might not be big, but it could still help the victims of the eruption. And though he surely needs it for the rainy days, he willingly shared everything because he still felt blessed that the volcanic eruption did not directly affect him and his family.

Tatay Ben wasn’t the only one who sent donations for Taal evacuees, of course. There are also many people like him who shared what they could, whether they were rich or poor.

Mang Eddie Macaranas is a musician who performed in the streets. He received a total of Php3,000 in tips – and he also donated everything for Taal evacuees.

A scavenger is a person who searches for and collects discarded items. Often, they sell these items to the junk shop for money they can use on their day-to-day needs. 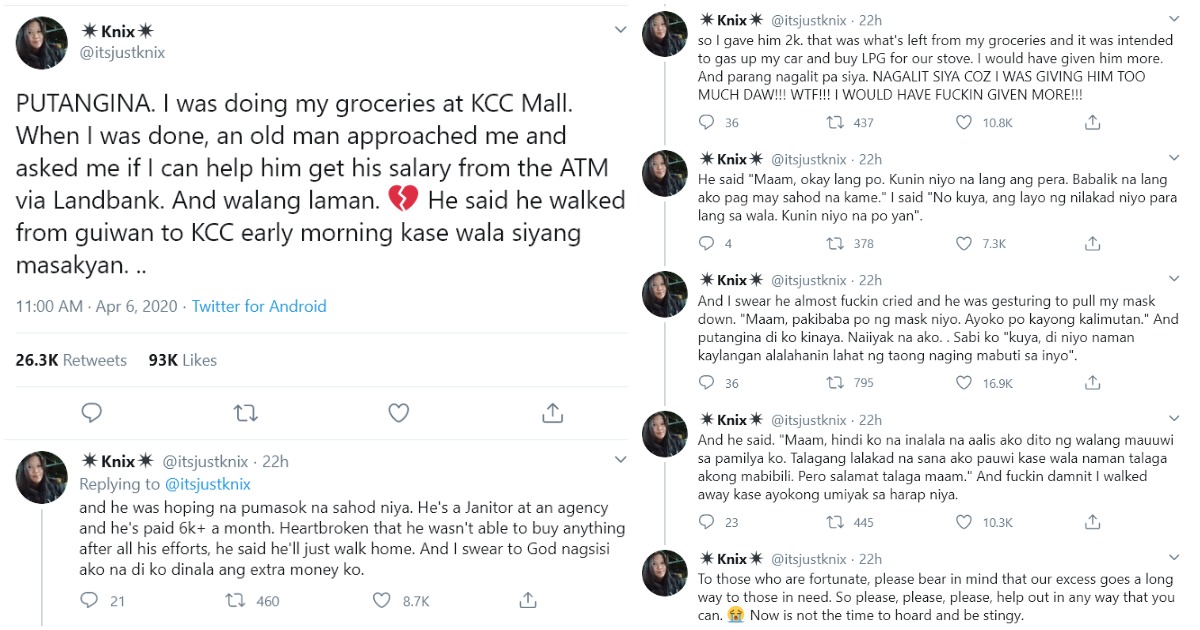 A janitor walked several kilometers to reach a mall to withdraw his salary but was sad to learn the money isn’t in his account yet. Dejected, he planned to go back home and try again the next day but found help in a kind woman who gave him some money for groceries!

Netizen @itsjustknix shared the heartbreaking story of how she encountered the janitor after she was done doing her grocery run at KCC Mall, a mall that’s apparently in Zamboanga City. In her post, @itsjustknix said that the old man approached her, asking for help in withdrawing his salary from his ATM. 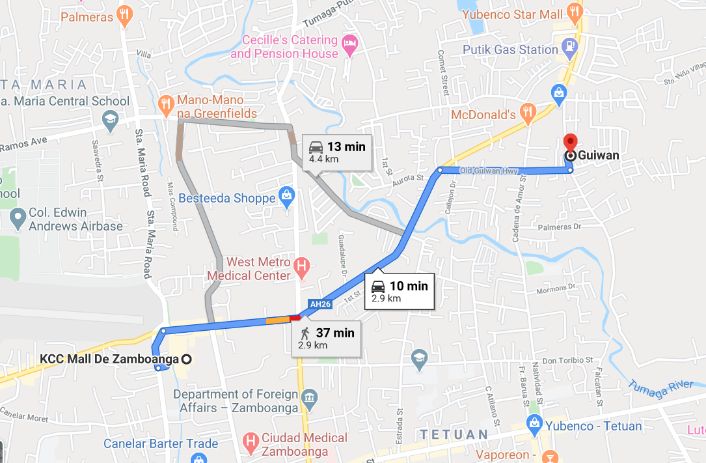 She readily assisted him at the LandBank machine but was brokenhearted to see that there’s nothing in the account. He had walked from Guiwan, a barangay that’s several kilometers away, and had hoped that his salary as janitor at an agency was already credited in his account.

Feeling sad for the old man and sorry that she was not able to bring more money, @itsjustknix gave him Php2k. She intended to use the money to buy gas and LPG, but those had to wait because this man’s family surely needed food. 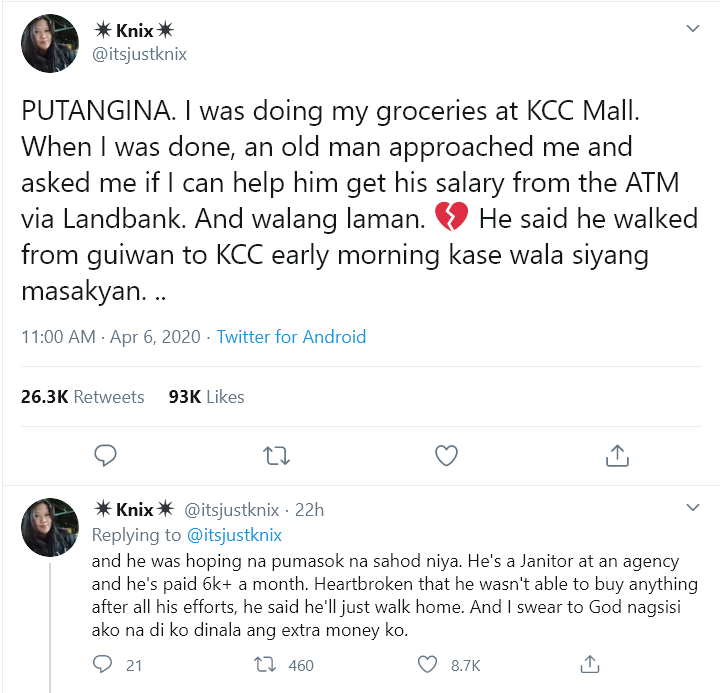 The old man refused to accept at first but she insisted. Nearly in tears, the old man told her to remove her mask so he could see her face. He wanted to see how she looks because he wants to remember her forever, for the kindness she bestowed on him. She smiled and told him he didn’t have to remember her face, but deep inside she also wanted to cry.

Moved by the experience, @itsjustknix urged people to be generous in this time of crisis 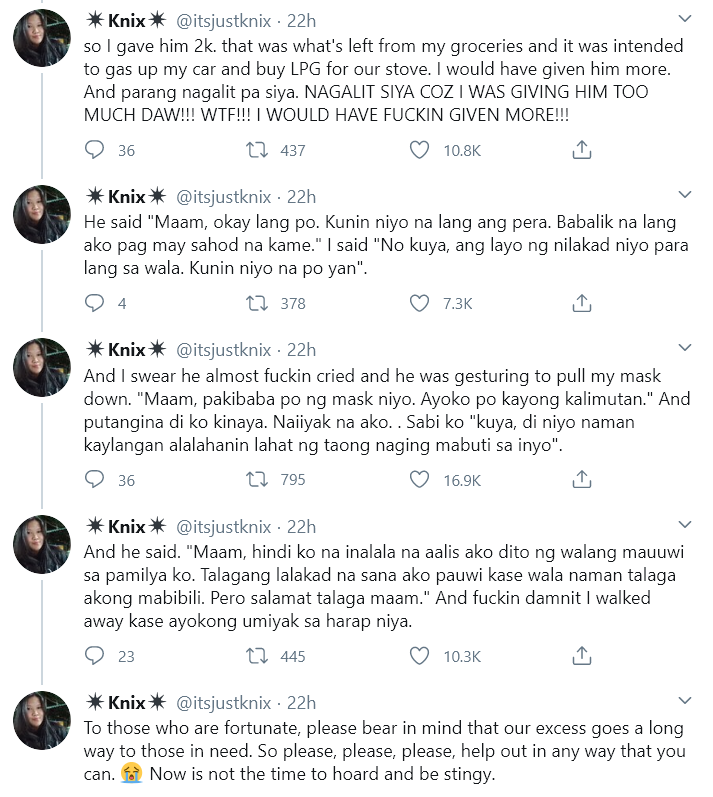 “To those who are fortunate, please bear in mind that our excess goes a long way to those in need. So please, please, please, help out in any way that you can. Now is not the time to hoard and be stingy,” @itsjustknix ended the Twitter thread.

Stingy is the term used for someone who is unwilling to give or share with others. 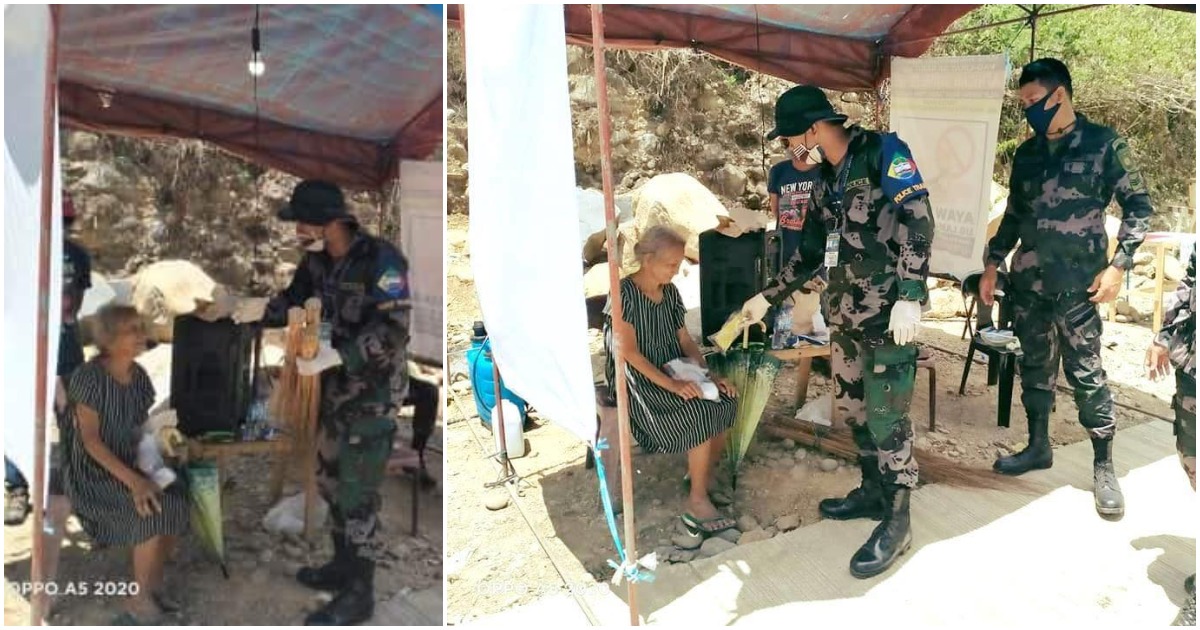 A police trainee recently went viral after buying an old vendor at the checkpoint, refusing to let her pass, but buying all her brooms so she can go home! The sweet gesture was captured on camera by his comrades who greatly admired his actions.

Kindness at the Checkpoint

In a photo shared by PSFTP 02-2019 Misamis Occidental Team Oroquieta, an 89-year-old woman tried to get past the checkpoint at Brgy. Paypayan in Oroquieta City to reach the market. Carrying several brooms, the old woman turned out to be a vendor.

Police Trainee Raymon Lendio who is undergoing FTX/OJT at the checkpoint quickly gave the old lady a chair so she could rest while they interviewed her. He was greatly saddened to learn that the old woman lives alone and has to sell the brooms so she can have food in the coming days.

After learning about her sad predicament, the police trainee offered to buy all her brooms so that she no longer had to go to the market to sell them. Then, he gave her some food, provided her with a face mask because she didn’t have one, and helped find a motorcab to bring her home.

The post went viral, with many netizens offering to provide food and help the old woman who was identified as Maria Daque Calo.

A number of netizens slammed her family for leaving her alone, but some family members would later defend themselves, saying that Nanay Maria refused to believe them about the lockdown and wants to stay independent. Many agreed that a number of old folks are like that; thus, they simply thanked the police trainee for his kindness.

“A job well done sir. Thank you for such a wonderful and amazing person. I’m pretty sure that your parents be very proud of what you did. God bless you more,” one netizen commented. 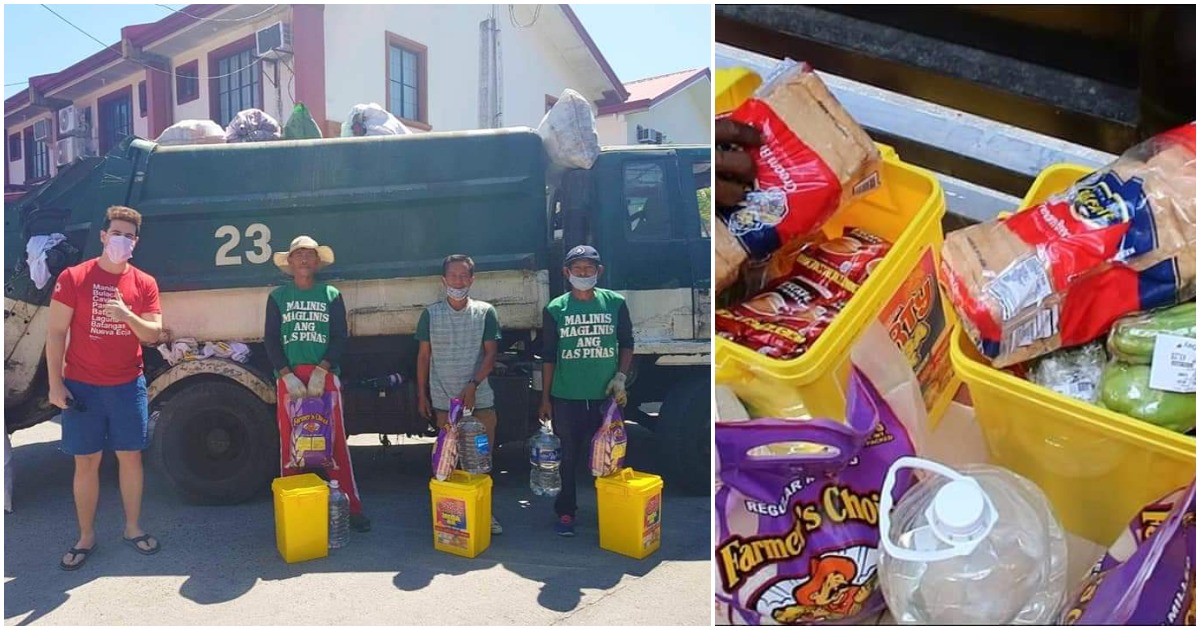 Basel has done so many things to the people of the Philippines, sharing his blessings with so many poor folks who just happened to be at the right place at the right time. There were many times when Basel would simply go out looking for people to help – and these lucky ones received a lot of money or a lot of goods!

Recently, as Metro Manila is placed on enhanced community quarantine (ECQ), Basel’s business had to temporary close down just like all the many others in metropolis. But this did not stop him from helping out.

In one of his recent vlogs, he shared the surprise he prepared for garbage collectors who regularly pass by their area to collect their trash.

“They knock to ask and collect our garbage, they are always there to clean up our mess. Inabangan ko po sila and I surprised them and made some ‘mini trash bins’ full of groceries. Pa simpleng way to help during our enhanced community quarantine,” Basel shared.

The garbage collectors were definitely surprised by the gesture! They were so happy to receive the unexpected blessing from this kind Syrian who always claims that he might not be Filipino by blood but he is Filipino by heart – and he’s bringing back ‘bayanihan’ in these sweet surprises he makes for poor Pinoy folks.

“I’m so happy to see them carrying food instead of garbage. At least they will feel appreciated somehow. Next time you see them, if you can’t help them dahil kapos din po, just thank them. They will appreciate it,” Basel said.

Bayanihan is known as the core essence of the Filipino culture wherein Filipinos help each other in times of need. This includes doing tasks together to lighten the load or providing food for the less fortunate so that no one gets hungry.

Girl Praised for Determination to Go to School Even with Just Rice as Food, No Viand