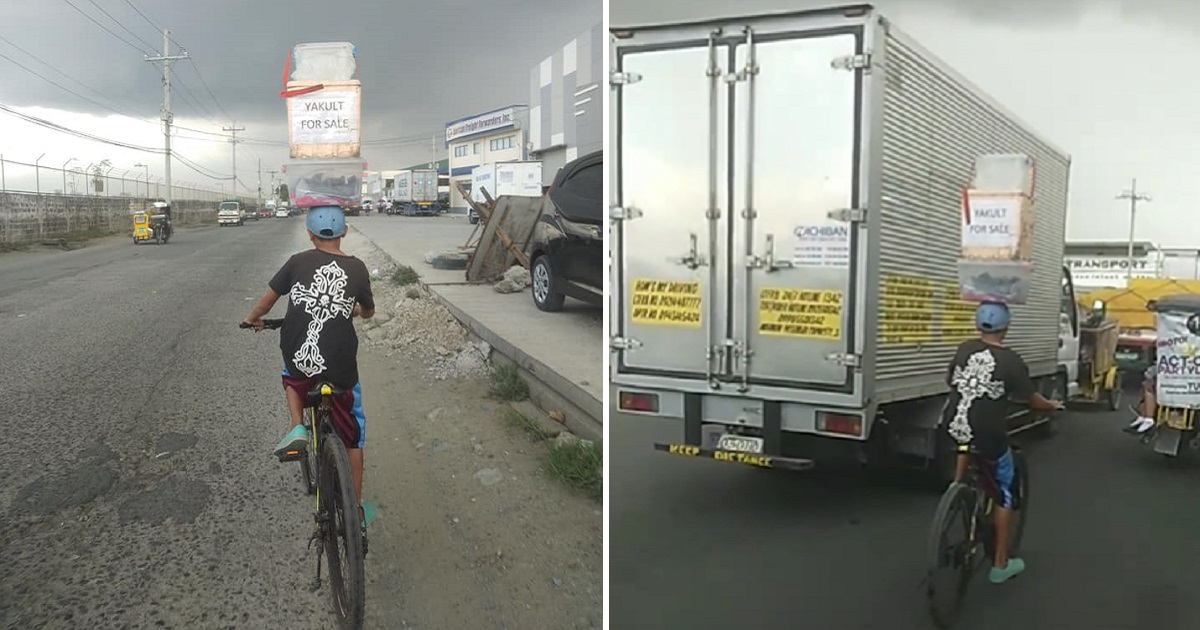 A kid vendor has gone viral after a video of him riding a bike with boxes of yakult and ‘kakanin’ balanced on his head was uploaded by someone who greatly admired his balancing skills.

On his Facebook account, netizen Bruce Dolores shared a video and some pictures of the kid who he had seen passing by on his bike, balancing three boxes on his head! 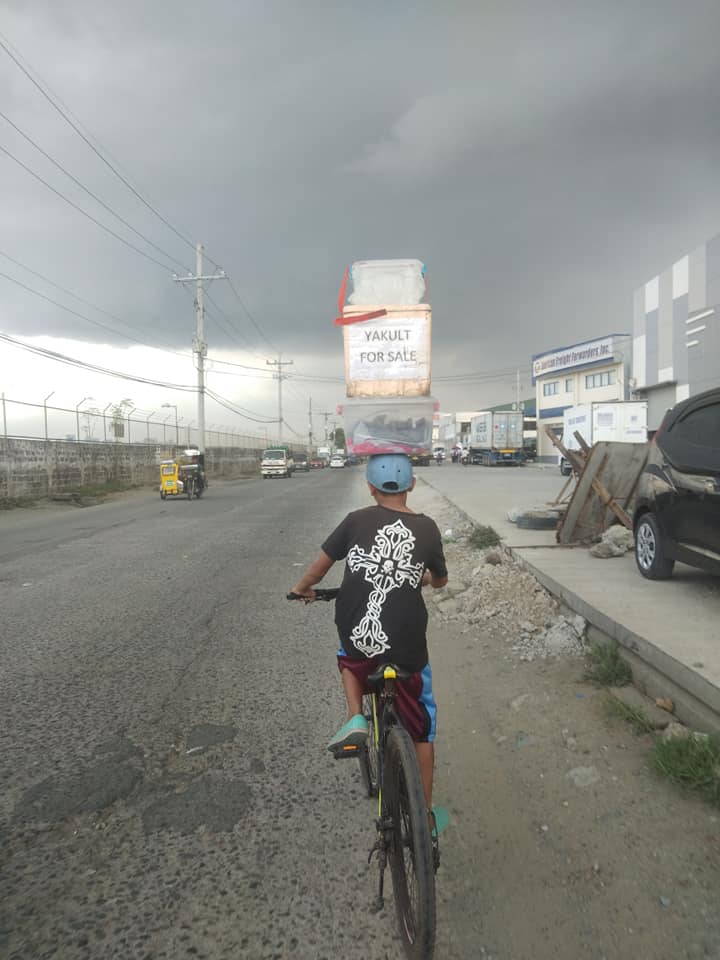 While Bruce did not detail who the kid might be or where he could be found, someone commented on his post and identified the kid as “Mark”. According to the netizen, Mark lives at Kassel Residences Moonwalk located in the City of Parañaque.

Just like Bruce, many netizens were greatly impressed by the kid’s skills in balancing the three boxes on his head even as he speeded with his bike along the busy highway! This certainly involves a lot of skills and risks, considering that one wrong move could bring him and the rest of his goods tumbling to the ground. 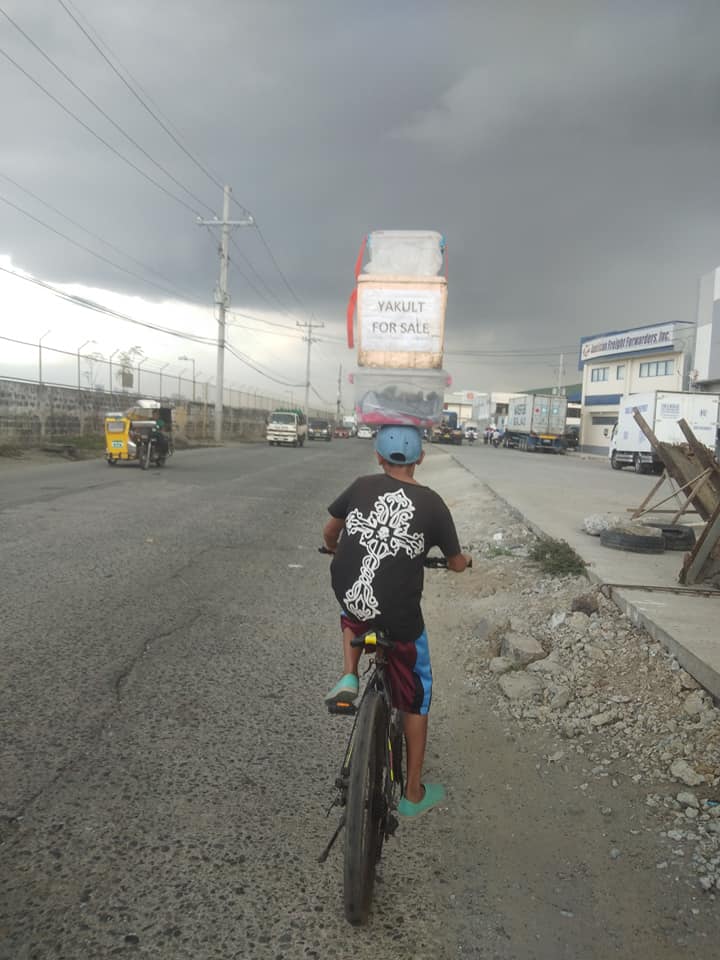 Bruce was unable to ask the kid for details or buy from him as he sped past, but it was clear from the boxes he was carrying on his head that the boy is selling yakult inside that ice box and various kakanin inside the two clear boxes. The mountain bike could have carried the boxes safer and better if it were modified to have holders for the boxes, but the kid appears to have mastered the art of balancing the three boxes even as he moved through traffic.

Yakult is a popular probiotic milk beverage being manufactured and sold by Yakult Honsha, based in Tokyo, Japan. The drink is fermented using Lactobacillus paracasei Shirota, the bacteria strain first isolated from the human intestine by Japanese scientist Minoru Shirota back in 1935. 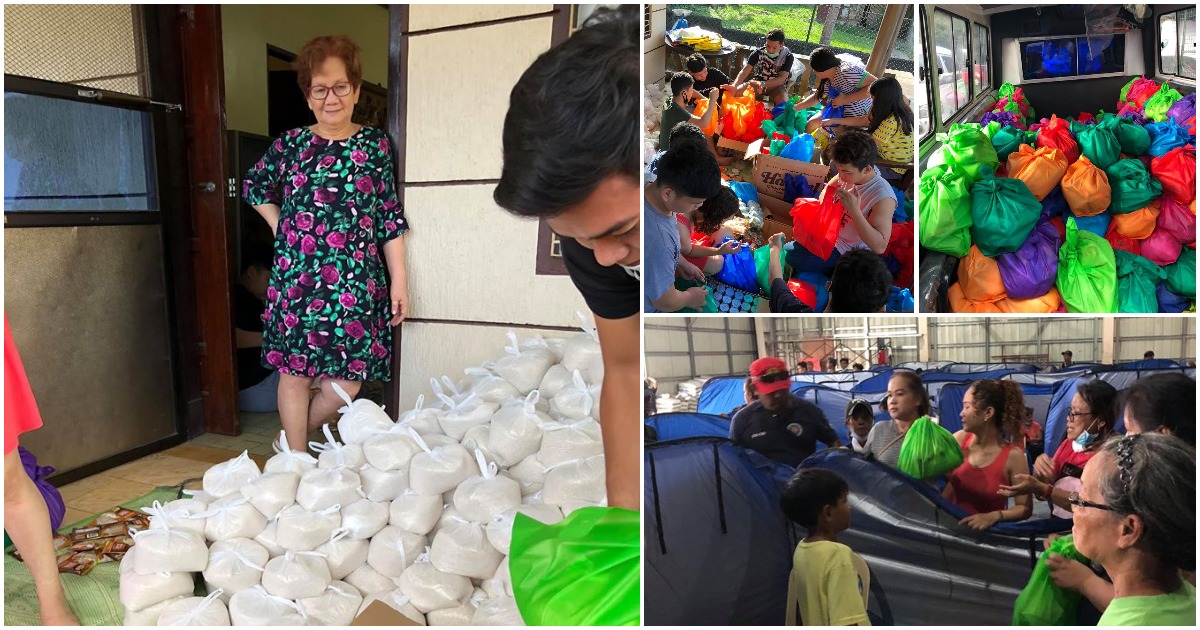 She was about to turn 75 years old and already had grand party lined up for her birthday on January 24, 2020; but a woman canceled the party to buy relief goods for Taal evacuees using the money she was supposed to use for the party!

In a post that has gone viral on Facebook, proud son Sherwin Mulingtapang shared photos of his generous Nanay Belen, revealing that everything was ready for the party but he is proud of this woman for thinking about others in need by canceling her own party to help the evacuees affected the eruption of Taal Volcano.

According to Sherwin, everything had been booked for the party, from the caterer and events place to the lights and sounds, the mobile bar and live band, and the photographers. They had already commissioned someone to make the gown for Nanay Belen’s grand 75th birthday party and the makeup artist was booked.

Despite it being just a few weeks away, Nanay Belen decided to cancel the big party. Why spend a lot of money in a 1-night event enjoyed by a handful of people when you can spend all that money to help hundreds in need at the evacuation centers? That’s what Nanay Belen thought – and she really canceled the party!

The family did not disclose how much money Nanay Belen spent on the relief goods but it was clear that it was at least a couple of thousands! They bought sacks of rice that they repacked for the evacuees. The family also got cans of sardines, lots of biscuits and instant noodles, packs of instant coffee, and bottled water.

Everyone in the family also helped out, including the kids, to repack the items and place them in individual eco bags. They also traveled to the evacuation centers to personally deliver the items and hand out to the evacuees! Even Nanay Belen was up to the challenge, accompanying them and talking with those affected by the eruption.

What are Relief Goods?

Relief goods are food, water, clothes, sanitary packs, and other items that provide the basic needs of people affected by a certain situation. These are temporary help to a quantified group of beneficiaries, in hopes of helping them alleviate their situation until they are able to go back home.