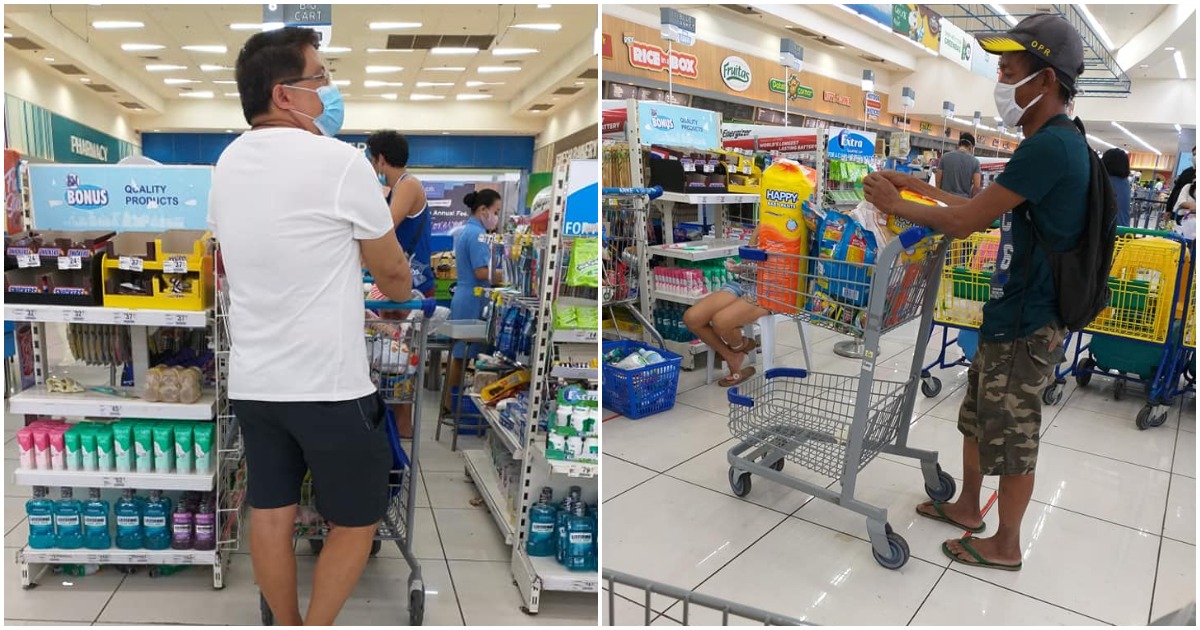 In this time of COVID-19 crisis, a lot of people lost their jobs and are left with very little money to buy food. Many are hungry and worried about what they could feed their families, especially after the 1-month enhanced community quarantine (ECQ) got extended!

Kindness in the Time of COVID-19

Marianne Ercillo is at SM Southmall in Las Piñas when she witnessed the beautiful act of kindness. She was already lining up at the counter when she noticed that the guy in white who was also waiting in line at the cashier moved to the other line to discreetly give the guy in green some bills.

According to Marianne, she isn’t sure how much the guy in white gave the other guy but she was sure the bills were blue (Php1k). Then, the guy in white simply went back to his line, as if nothing happened. It was a great moment to witness!

The guy in green hurried back to the aisles, leaving his cart at the counter. Then, he came back with two packs of milk and thanked the guy in white for giving him money as he was able to buy more milk for his baby. Isn’t that sweet?

In the Philippines, people would say, ‘Mabuhay!’ but this confuses foreigners because the directly translation of the word to English is ‘live’.

But in the Philippines, ‘Mabuhay’ is more than just the translation of that Filipino word. It also means a greeting equivalent to ‘Hello!’ and also means ‘Long live!’ or ‘May you live long!’

An old woman walks for 2 weeks to go back home with her dog in tow – and she never left her dog behind, the no matter the difficult situations she faced along the way.

Finding transportation has become difficult amid the pandemic but for an old woman who is bringing plenty of belongings plus having her dog in tow, it was an impossibility.

Nanay Areta had come from Binalbagan in Negros Occidental but planned to go home to Saravia in Enrique B. Magalona (EB Magalona), also in Negros Occidental, located about 100km to the north. At first, she tried to search for public transportation, but no one would let her ride.

So, Nanay Areta decided to make the long trek home. She had not anticipated that it would take her weeks to do it, but she was simply trying to make as much progress as she could each passing day. For someone her age, the trek was long and difficult but she refused to leave her loyal dog behind.

He’s as much her companion as well as her guard. The two made the long trek, braving the rain and hot sun. Their trip was slow but they made progress, anyway.

Nanay Areta and her dog Rex had been walking for about 2 weeks when they encountered April Rose Ubaldo, a teacher who regularly feeds stray dogs in the community. April Rose was out feeding some dogs when she noticed Nanay Areta and Rex.

The teacher found it so sweet that Rex was wearing some clothes, but was shocked to learn that the two had come so far! Aside from providing Rex with food, they also offered dinner to Nanay Areta.

“No one allowed her to have a ride because of her stuff and her dog, Rex. She was given food and some money by the officers at the checkpoint thus she continued her journey. We encouraged her to have dinner while we think of ways to send her home,” April Rose shared.

“Then we drove to her destination and endorsed her to the Brgy. Officials who were very willing to help. She is now home with Rex after the rainy and sunny days spent on the road.”

We’re so thankful that Nanay Areta is safely home…

The COVID-19 pandemic has greatly affected how people travel these days. Areas in enhanced community quarantine (ECQ) have prohibited most public transportations. But even those in general community quarantine (GCQ) are only allowed to pick up passengers at half the capacity they used to have. This is to ensure social distancing even inside vehicles.

Backriding on motorcycles is also prohibited, even with couples or people living in the same house. 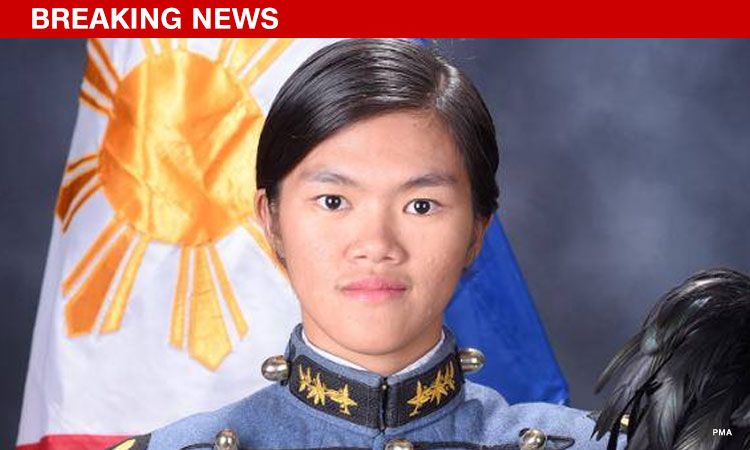 A female cadet tops ‘Masidlawin’ Class of 2020 of the Philippine Military Academy (PMA), earning the distinction of being the sixth woman to top the class since 1993.

Top of the Class

Besting the 196 graduates of her class, “Masidlawin” Class of 2020, Gemalyn Sugui makes history as the sixth woman since 1993 to top the graduating class. That’s still a big deal considering that the country’s top military school was founded in 1905 and officially established in 1936.

The daughter of a farmer and a public school teacher, the 25-year-old Sugui plans to join the Philippine Army. Aside from being the Class Valedictorian, Sugui will also receive several awards: the Presidential Saber, the Achievement Award for Academic Excellence, the Rule of Law Award, the Philippine Army Saber, the Spanish Armed Forces Award, the JUSMAG Award, the Social Sciences Plaque, and the Management Plaque.

Although she’s an achiever, she did not expect to top the class.

Due to the COVID-19 crisis, however, the graduation this year will be different from the previous ceremonies. The graduation rites will still push through as the cadets live within the campus, away from ‘outside contact’, but the ceremony will be small and won’t include their parents or guardians. The media won’t be allowed in the ceremony, too.

While the PMA graduation tradition involves cadets in formations on Fort Del Pilar’s Borromeo Field in Baguio City while doing the testimonial parade and review to honor retiring alumni and Trooping the Line, these might not be possible this year.

However, the graduation will be streamed live to allow everyone to watch the rites at the comforts of their homes. Many graduates feel sad about this.

PMA is the Philippine military school of the Armed Forces of the Philippines (AFP). The school produces the country’s military officials as the training school of future officers of the AFP. The school is authorized to confer a Bachelor of Science degree on its graduates after they successfully complete the four-year course. 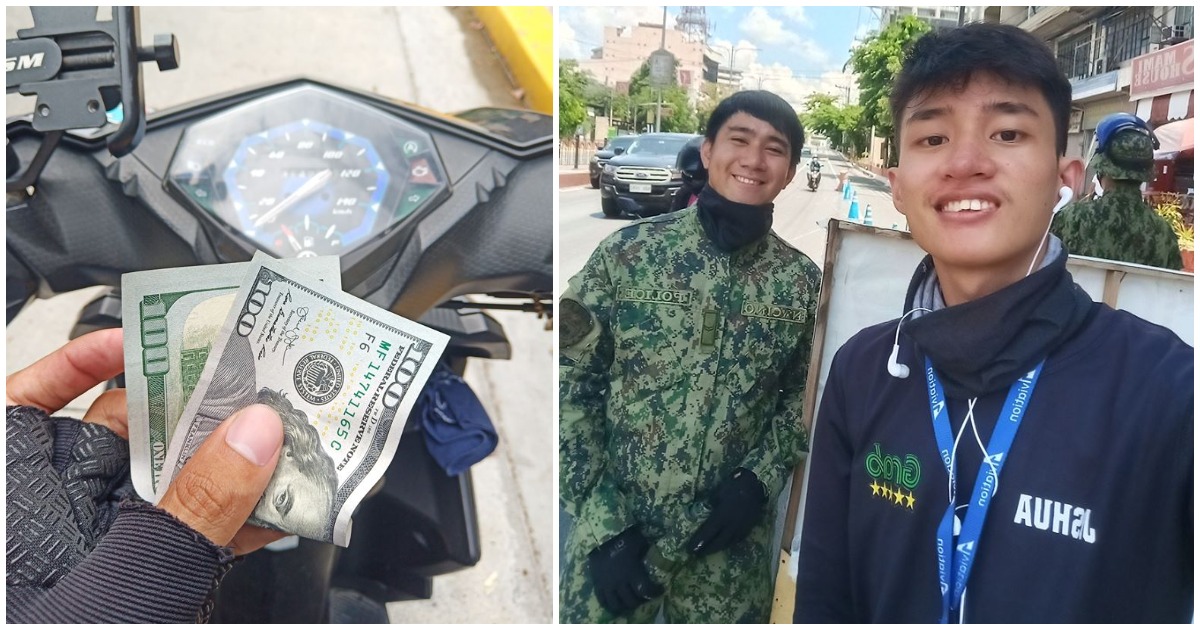 He thought he would be in trouble after passing at the lane dedicated for frontliners but GrabFood rider and working student Joshua Basa received something totally unexpected, $100 from the police officer who stopped him, PCPL Sirjon Nacino.

According to Basa, he was heading to Sta. Mesa to pick up an order when he passed by the checkpoint along España Boulevard. He went to the frontliner lane but received a sermon from the policeman who got angry that he tried to move to the lane despite the barricade.

Basa kept asking for forgiveness, explaining that he’s just a working student who also works as GrabFood rider. He would have trouble paying the fine. Since he can’t produce his student ID, he could only give his OJT ID but the policeman got angry that he has money to buy a motorcycle but can’t pay the fine to get his license back.

Again, he explained that he only got the motorcycle on installment because he had a difficult time commuting from his home in Tondo to Pasay where he studied and then to his job at Shakey’s. At that point, the 21-year-old GrabFood rider burst into tears. He had been having so much troubles the entire day that this trouble at the checkpoint became his breaking point.

The policeman later replied to his post after learning about it from a friend. The two met again when Basa went back to the same checkpoint, bringing food. But the policeman did not accept the food, telling the young man to bring it to his family instead. Basa said he didn’t expect that he would receive money from the policeman – and $100 (Php5,000) is a big amount!

It turned out the cop had Php1,000 in his wallet but he chose to give the hardworking student the $100 he had been keeping for a long time. He said that he prefers to help those who work hard to help themselves…

Where to Exchange Dollars in the Philippines?

It is easy to exchange dollars and other currencies in the Philippines as there are plenty of money changers inside malls. You can also do so at any bank and there are also options to do that at some pawnshops that offer remittance services.