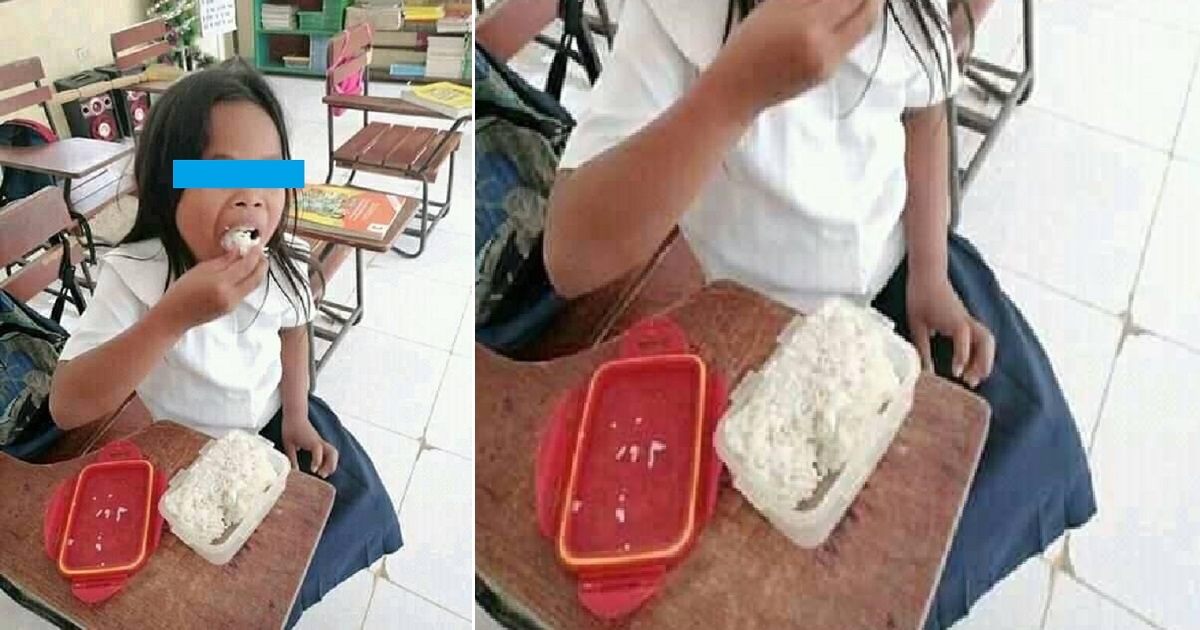 A lot of kids all over the Philippines come from poor families that can’t even afford to provide them with meals three times a day, let alone give them viand for lunch in school. That’s a sad reality. But what’s impressive is that despite not having much, these kids are still so determined to go to school! Many don’t even miss a day in class, even if they have to go there with an empty stomach…

In a heartbreaking post shared by Facebook page D30 viral video and news, a young girl could be seen eating just rice for her meal. Despite having no viand, she eats her rice with much gusto.

But what really amazed many netizens is that this girl, whose name and location were not revealed in the post, still manages to go to school every single day without fail. Yes, she does not have enough food and most likely didn’t have a good breakfast either. She might also come home to no dinner, but her determination keeps her going to school to learn.

How does it feel to eat just rice, no viand? Well, it is bland and not so nice, but because she didn’t have a choice, this kid just has to accept her fate.

Many netizens believe that this girl will have a better future because even at a young age, she knows how to make the most of her situation. Despite being poor, she didn’t quit school!

A lot of netizens took pity on her situation, but others said that she’s not to be pitied because she is an inspiration to many!

“What a pity. But this girl will be successful someday. Just remember her face and name she’ll one of the most honored woman in the near future. God bless you little lady,” one netizen wrote.

“We were doing the same thing when we were at that age. Walang Baon and Kahit nakapaa lang Kung pumasok. Sa school. But thank God. Dreams come true. And that we will never forget where we came from 🙏😇,” another netizen commented.

Baon is something that you bring from home to your work, school, or any place you are going to. While many young people think it’s not cool to bring packed baon from home, it is actually a good way to save money because cafeterias and restaurants often charge high for the same food you can actually cook at home.