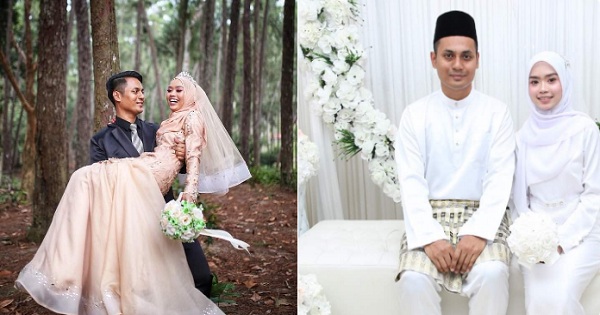 Let’s admit it, we’ve all had experienced having a crush on our teachers back in our younger years. Of course, these childhood crushes remain as secret admiration to that beautiful or handsome teacher we see in school every day; this rarely progressed to a full-blown relationship, especially because this is strictly prohibited in most schools.

But the love story of a Physics teacher and his former student recently went viral, with people gushing over the sweet way they fell in love.

Four years ago, Muhammad Shamsul Bahari was the Physics teacher at a private tuition center in Kulim, Kedah in Malaysia where Intan Syazwani Mohd Hairizan was studying.

At the time, there were a lot of students who admired the teacher, including Intan, but he was married at the time and they were his students, of course, so he never pursued a relationship with anyone.

Fast forward to 4 years later, Intan who is now 20 years old, found 32-year-old Shamsul Bahari on Instagram at the beginning of 2018.

The teacher had no idea that Intan was a former student because she had changed a lot in the years that passed.

Shamsul Bahari’s interest on Intan started when she replied to one of his Instastories, writing, “Teacher, handsome.”

Now separated from his wife, Shamsul Bahari pursued Intan. When they met in person, he was touched at how easily Intan and his 6-year-old daughter got along.

“I can see that she is really loving and really cares about my daughter, and none of it is fake,” Shamsul Bahari said.

He added that there had been quite a number of women who were interested in him after he got divorced with his first wife but none appeared to show interest in his daughter. Intan was different from these other women.

So, despite the 12-year age gap, the two fell in love. The two got married last August 18 at the Al Jamiul Makmur Mosque in Kulim and quite understandably many of Shamsul Bahari’s students were there to witness the moment and wish the couple good fortune.