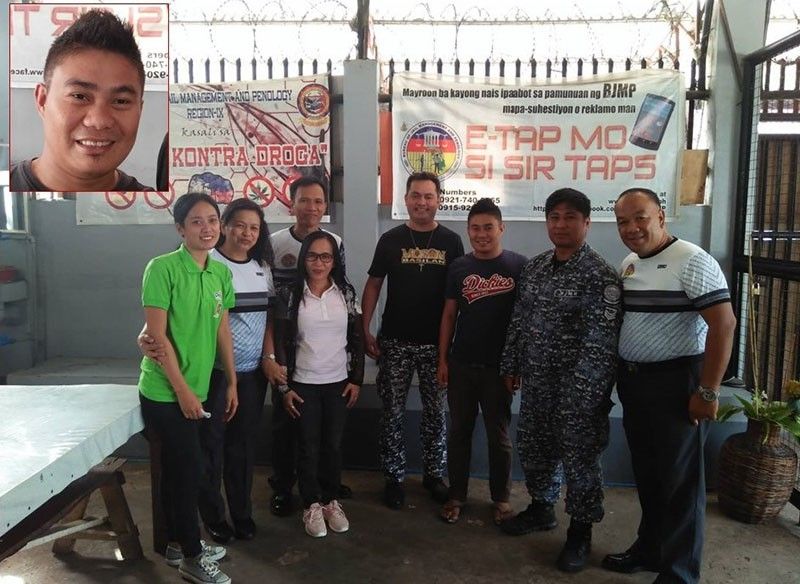 Being in jail for something he did not commit, Jumar Ullang could have lost hope and simply went with the flow, yet this young man knew that he was innocent – and he did everything in his power to set his eyes straight on the goal. Because of this, Ullang is among the passers of the December 2018 Criminology Board Exams!

He was still young when he was jailed after becoming a scapegoat to an incident that led to the loss of one person and injury to many. Witnesses were paid by a third party to name him as the perpetrator, leading to Ullang getting jailed.

As many already know, justice in the Philippines is very slow. So, Ullang spent many years in jail despite his innocence.

While in jail, he did not lose hope. Instead, he availed the jail’s Alternative Learning System (ALS) program through the Department of Education (DepEd). This helped him complete his high school education.

Being in jail opened his eyes to the many difficulties in the life of the inmates, but this would also lead to Ullang wanting to become a jail officer.

“My ambition now is to join the BJMP so I can also help watch over inmates and help them reform for good,” the former inmate shared.

He spent a good number of years in his youth at Isabela City Jail, in Isabela City, Basilan, but the experience made him a better person.

After graduating from high school in jail, Judge Danilo Bucoy of the Regional Trial Court in Basilan dismissed the cases filed against him.

He already lost so much time in jail; thus, Ullang immediately enrolled in college, taking the course of BS Criminology. Time flew so fast – and the former inmate graduated from college.

After passing the board exams and becoming a licensed criminologist, Ullang went back to Isabela City Jail to visit his former custodians and the friends he made among the inmates.

“It feels good to see that our local psycho-social intervention thrusts for inmates have produced a person like Jumar [Ullang], now a licensed criminologist,” said jail warden J/SINSP Zacarias Dagupan. 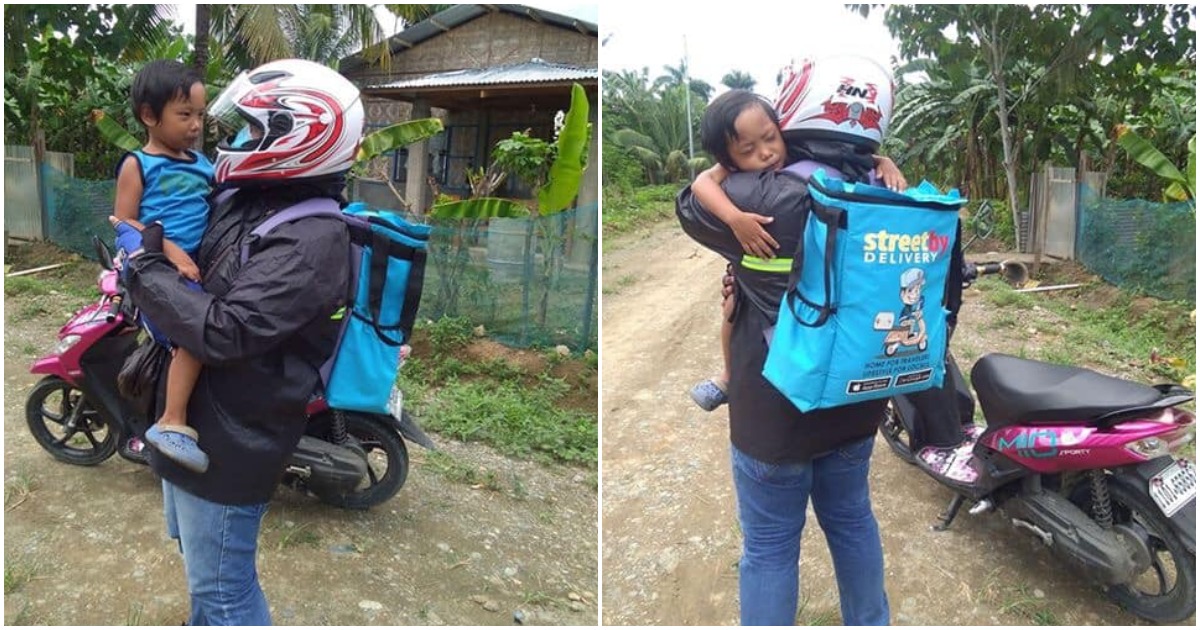 A heartbreaking moment shows a boy crying as his stepdad leaves for work – and it has tugged at netizens’ heartstrings.

Parents all over the world know the heartbreak of leaving for work, with their young kids crying as they stop their parents from leaving. Kids simply want to spend more time with their parents and could not understand why they have to leave for work.

Jezza Vasquez witnessed the heartbreaking moment a kid ran after his stepdad, asking for hugs and cuddles. The loving kid did not want his stepdad to go away, especially because his mom had already gone to work as well.

According to Vasquez, her heart broke after seeing the sweet moment between the two. In her post on Facebook, she shared the pictures and thanked delivery riders such as this guy who works for Streetby Delivery. She acknowledged the sacrifices these riders make each day as they leave their families to work.

Vasquez would urge netizens not to get if the riders are delayed.

Kiana Castillo, the child’s mother, said that her partner is not actually the boy’s dad, yet he loves the boy as his own – and the kid also loves him as his dad!

Kudos to this rider!

It is natural for children, particularly toddlers, to feel separation anxiety particularly every time their parents leave for work. For these kids, they feel that they might lose their parents, knowing that they would be away for a long time while at work – and those 8 hours you spend at work might already seem like forever to kids! 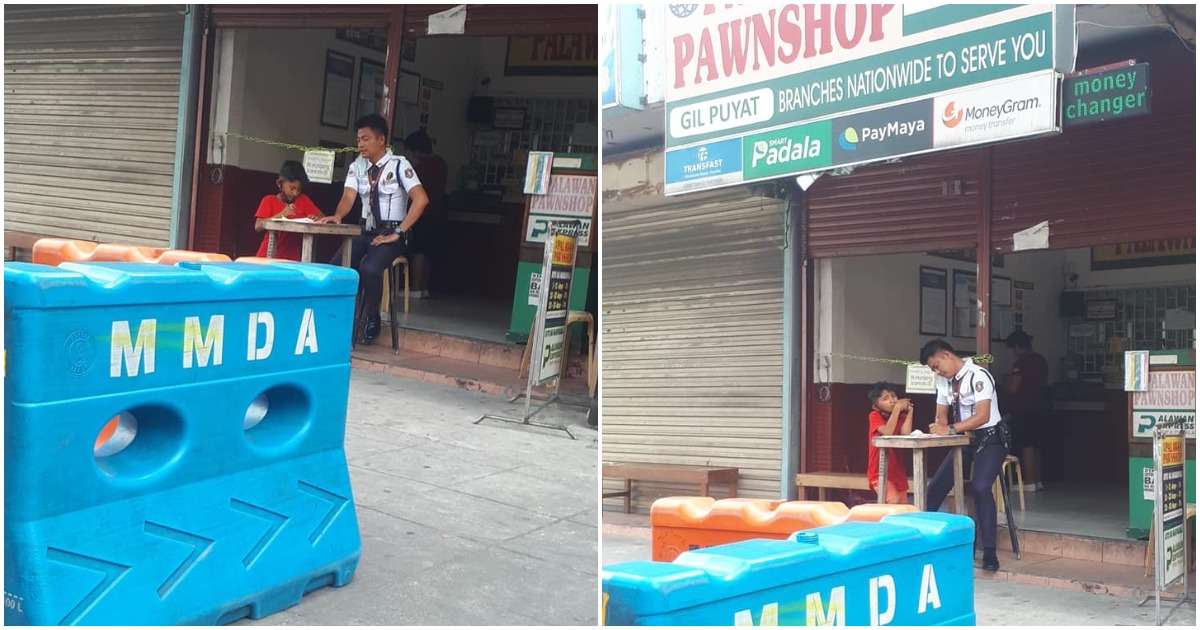 A security guard tutors a street kid, teaching him to read and write. For his kind deed, this young security guard would go viral, with netizens praising him for sharing his knowledge with this boy.

It is not something that one would expect to see in the streets. Thus, when John Robert Flores spotted a security guard giving free lessons to a street kid while he was on duty outside a pawnshop, he quickly snapped some pictures. It was a great act of kindness that deserves to go viral, he knew.

Flores shared the photos of the security, writing that they had spotted the sweet act of kindness while walking near a Palawan Pawnshop close to Arellano University in Manila. The security guard was patiently teaching the kid how to read and write.

He would also reveal later that they had seen the same security guard also teaching several other kids, but this is the only time he thought of taking a photo. It seems that this young man has a big heart for the street kids and hopes that he could help them in learning how to read and write. Isn’t that sweet?

Some netizens commented that if this security guard could teach the street kids, then there is no reason why parents can’t also do it amid this pandemic when everyone is told to stay at home.

What Age to Learn Reading and Writing

For most kids, learning how to read and write begins in preschool but is often only achieved depending on the child’s capabilities. Some kids learn how to read and write as early as 2 years old while others do it by the time they are 6 or 7 years old. Sadly, there are those who learn much later due to lack of resources. 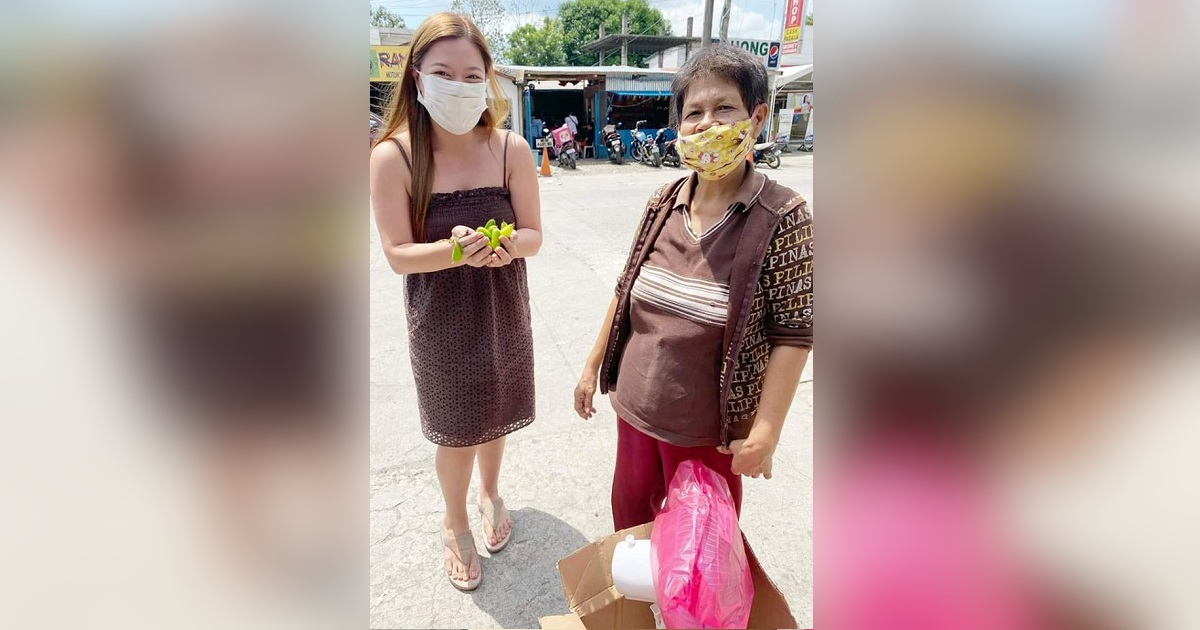 An old woman receives a new electric fan after trying to barter their old fan for rice. She also received plenty of rice from kindhearted netizens!

In these days of pandemic, a lot of places have activated barter trading – known as the trading of goods and/or services, without money involved. This is something that was done as opposed to online selling groups where the sellers earn profit from the transaction.

You can barter anything on most of these barter trading sites. Make sure that it is legal to barter, of course. Thanks to groups like this on Facebook, people were able to get rid of stuff they don’t need and find something else in return that they might need at home.

In Bacolod City, 62-year old Aurora Sarcos Dela Torre of Barangay Estefania barters their old electric fan for some rice. The fan is used and has a defect but she’s willing to give it to anyone who might still be able to use it, so they can have some food.

A lot of netizens were touched by the offer. Instead of taking Nanay Aurora’s broken electric fan, they went to their house to bring her rice.

Dr. Jessica Atas, 28, also saw the post and thought that Nanay Aurora and her family would surely need the electric fan due to the heat wave. So, instead of getting her fan, she offered a brand new one!

Then, she simply asked what Nanay Aurora can barter in return. She refused to accept some stuffed toys, knowing the kids in the old woman’s house will enjoy it better. The kind doctor would later accept the old lady’s offer of kamias (locally called as ‘iba’) for the trade. She received 50 pieces of the sour fruit.

It’s wonderful that bayanihan still exists, particularly in this time of pandemic.

A barter is the exchange of goods instead of paying someone using money for the purchase of something. This kind of trading was popular in the olden days, particularly before money was invented. Often, people barter something in exchange for something of similar value. But it is also possible to just barter something you don’t need with something you need, regardless if the value is similar.