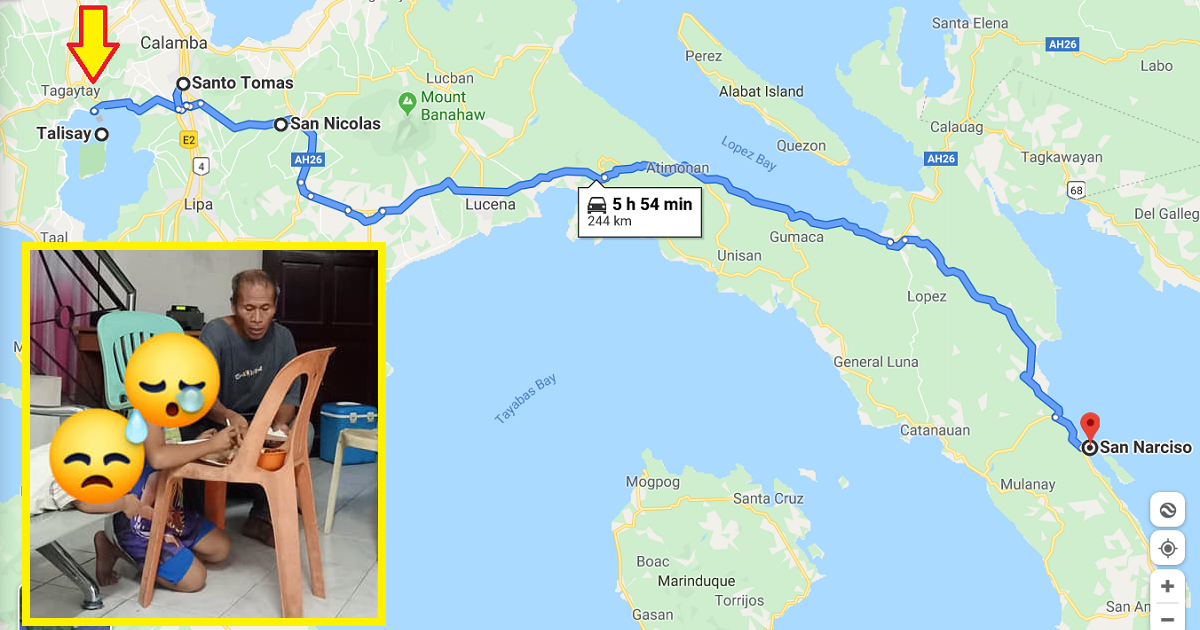 He’s 57 years old but one dad planned to walk some 200+ km from Batangas to Quezon with his children so they can go home after losing his job. Thankfully, the tired dad and his kids found help from kindhearted netizens who helped them go home.

Crisanto Amican, 57, hails from San Narciso in Quezon province, Philippines. He went to Talisay, Batangas for a job, bringing his family along. But Tatay Crisanto got sick and wasn’t able to work. What’s worse, his wife left him and their two kids, ages 8 and 2.

Since he can’t work in his condition and can’t also leave his kids behind while he tries to find a job, Tatay Crisanto decided that it was best for them to go back home. There’s just one big problem: they didn’t have enough money for fare. So, the three tried to ride a bus but their money was only enough for them to reach the town of Sto. Tomas, just some 20km from Talisay.

This led Tatay Crisanto to force himself to carry the kids as they began their journey back home. It was actually a good thing that they passed by Barangay San Nicolas in San Pablo City. They were spotted by a barangay official who took pity on this bunch of obviously tired, hungry travelers. Breezy Ibarra quickly helped the family, giving them food as the rest of the barangay officials welcomed them.

They were provided with food and a place to rest. After verifying their story from the documents carried by the family, Ibarra and the other barangay officials helped them out. First, they asked help from the cops to report the matter. Then, they let the family get a much-deserved rest before helping send them home to San Narciso.

The barangay officials were truly angels sent to help this family find a safe way to go back home. Kudos to you, sirs, for helping this family out.

Bus Travel in the Philippines

Buses are the most common modes of transport for short and long-distance trips on land in the Philippines. There are also buses that provide direct transport even across seas through ro-ro boat rides.