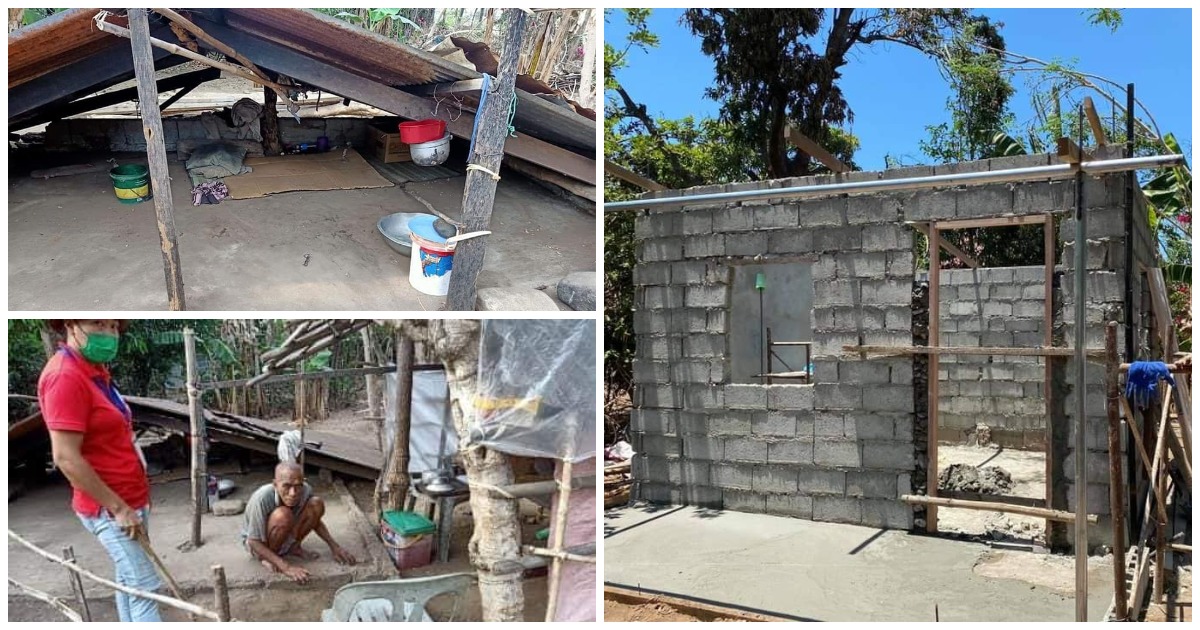 A blind old man living in a ‘roof house’ gets new home from kind netizens who raised enough money and building materials so he can have a better, safer place to live in.

Rogelio Tabangcura, 68, lives on his own inside a ‘roof house’ in Barangay Nanerman in Santo Domingo, Ilocos Sur. His house is really just a roof over the ground. He has to crawl inside to reach his bed which is only made of a thin mat and a cardboard box.

There is very little possession inside Tatay Rogelio’s house, but he thinks he does not need much because he is blind. He lives on his own inside that makeshift house but gets food from his siblings from time to time.

The poor man had lost his home after a typhoon 2 years ago but did not have means to rebuild it and could not also do it on his own as he had already lost his sight.

Taking pity on Tatay Rogelio’s plight, a kindhearted netizen named Krishna Tobia who now works in Washington, USA, decided to send him some money and also do a donation drive for the old man’s house. Soon enough, they were able to gather over $2,000 (Php100,000) for Tatay Rogelio’s home! Wow.

There were also many who donated sacks of cement and various construction materials needed to build this blind old man a new home. Quite a number of people also arrived to help build the house. They’re making great progress on the house. This will surely be finished soon, before the rainy days arrive.

The donors had given so much that for sure, when the house is completed, Tatay Rogelio will have a nice, comfortable bed to rest on, enough food to last him for weeks, and a cozy place to stay where he will always be safe.

Best House Materials in the Philippines

In many rural places in the Philippines, people could only afford to build nipa huts. Though such are cool and easy to build, they don’t last a long time. In this country where typhoons always strike each year, concrete homes are a better option.

The best house materials to use are hollow blocks with cement and steel bars. These can be more costly compared with nipa huts but they typically last a lifetime, as long as the house was properly built.